By Friday the coop was just about ready to go. All we had to do was get some provisions and put on the roof.

We opted for the mason jar style feeder and water holder. And some feed called Start n’ Grow. And one huge bag of pine shavings. 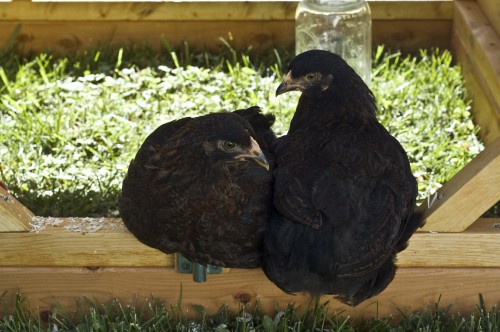 (We dubbed them Mac n’ Cheese. Mac is on the left and Cheese is on the right.)

Sunday we put the roof on and it actually was really easy. I just have to say that those Garden Ark instructions are amazing. We were able to finish in one week just putting in a few hours each day. I think I’m actually going to miss working on a wood working project each morning. 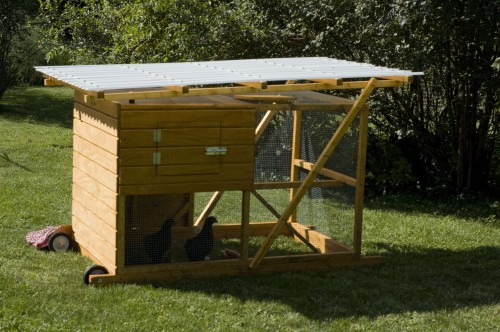 The coop is a really great design. There is an egg door on one side: 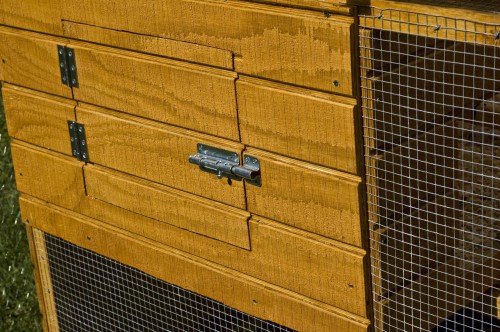 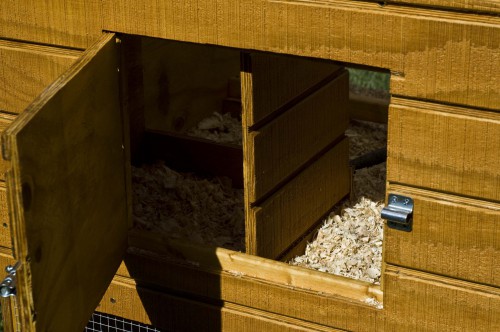 And then a larger double door on the other side – I open that one up in the morning so they can get out into the run. It also makes it easy to clean out the hen house. I’ve had a few people ask me about “what do you do with all the waste?” Well, waste not want not and all that junk, I just put it on the compost pile. The mixture of pine shavings and chicken poop is great for the garden. 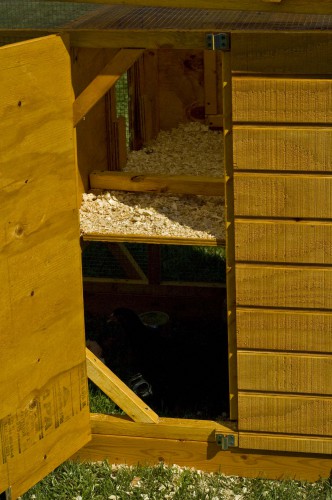 We picked up our chickens from our friend Matt on Monday and they were not happy at all. They hated being in the carrier. I would like to say that they love their new home as much as we liked building it, but right now they are suffering from flock separation anxiety. They are used to chumming around in a flock of a dozen and now are feeling stressed that it’s just the two of them. When the sun started going down they started doing this little crying sort of chirp. Poor little ladies. Plus it was freaking hot out. I’m sure that didn’t help. 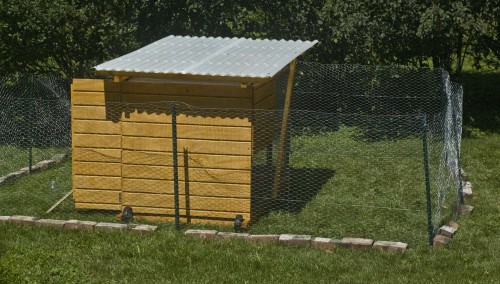 The other day I put up a little chicken wire fence so they would have a larger area to play. They haven’t really taken it to it though and spend most their time roosting on a stick in the coop. 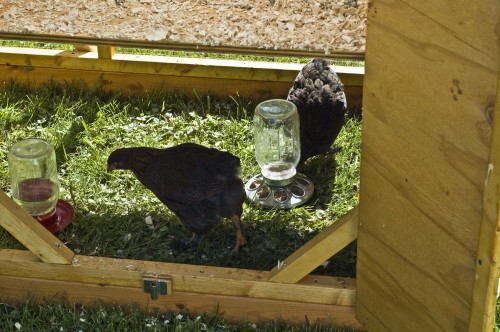 They also don’t quite get that they have a hen house that will protect them from the elements and predators. So when it gets dark, they are distressed because they feel like they are in the wide open in the run part of their house. I’m hoping that after a few nights of being forcibly locked up in their hen house they will get that’s where they are supposed to go. Last night at least they came straight to me to be lifted in, which is much better than the frantic running away they did the first few nights.

Matt assured us that they will be right as rain soon enough and it will just take some time. And he was right, they are starting to really warm up to me. Treat help. So far they Love chunks of tomatoes and cooked rice (I smash leftover bits from dinner into Tablespoon sized balls for them). 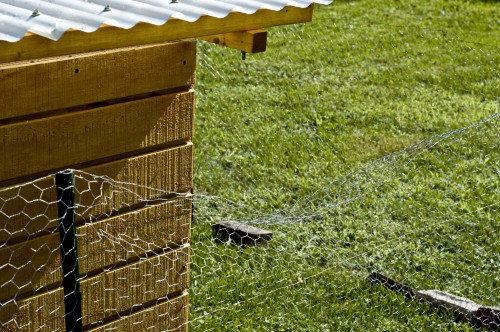 I think we have a predator issue, the fence was way contorted this morning. Good thing they were locked up safe and sound in their house.

I’ve actually enjoyed getting up and letting them out of their hen house each morning. They are so funny. That’s the time of day that’s not crazy buggy. Oh and that’s the other thing. They love chomping down on mosquitoes. At first I was like, “Oh no, what if they have issues with all the ants (we have a load in our back yard) or all the mosquitoes (whose numbers are up because all the floods and standing water).” Well after watching them for a little bit, I realized that every time a bug came around…”chomp, chomp, chomp.” Turns out they love munching on mosquitoes, thank goodness. What swell little birds.

I’ll post about the chickens from time to time, but just the major stuff from now on. If gardening, mini-farming, chicken-keeping, drawing, and random bike riding is your thing, you can follow that part of my life on my personal blog on Kristinmroach.com. It’s basically a mash of everything that happens in my life.

Have a great Weekend!

5 thoughts on “Bringing the Flock Home”