Home Redress: A Weekend of Projects and Moving 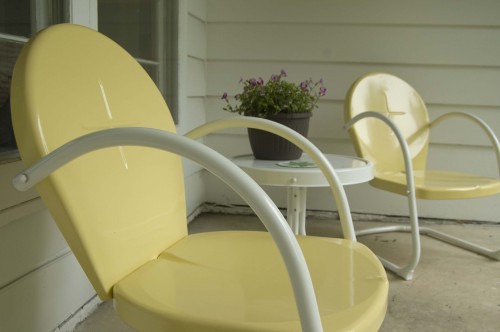 This past weekend my folks came up to help us move, fix things up around the house, and hang out and have a little fun. My folks went above and beyond helping us get things done around the house. Honestly, the things that they helped with would have been left undone for I don’t know how long.

Friday night we schemed, made a project list, went to Lowes and gathered supplies.

Saturday, before I even woke up (at 8:30am mind you, not exactly super late) my parents were up and bustling around getting to work on projects. My dad jumped straight into what was the biggest blight to the property. The garage side door. 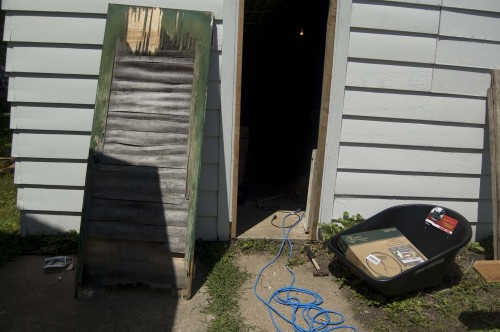 This door was in such bad shape it was causing two big issues. One it was making it far too easy for raccoons to get in and literally crap all over the place in the rafters. Seriously, first time we ventured up there this weekend, there was a lot of raccoon “presents” among the bike parts and horse tack.

The second issue with the door was that it was freaking ugly. Like really, you couldn’t just replace the door? Well, it turned out to quite an involved project of making the door frame slightly smaller and trimming the bottom off the door. Like everything else in the house, it was not a standard size. It’s like they had a fraction fetish or something. Nothing is a whole  number, it’s all 1/4 or 3/4! A-holes.

After my dad worked half the day getting the door set up, I painted it blue to keep it from rotting away like the old one. I am really loving this color of blue and may just paint our front and back door with the same color. 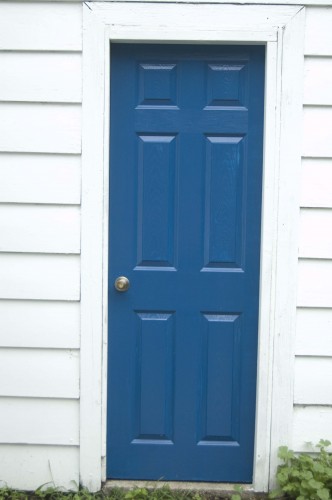 While my dad was getting the door issues taken care of, I installed a new shower head in the master bathroom. 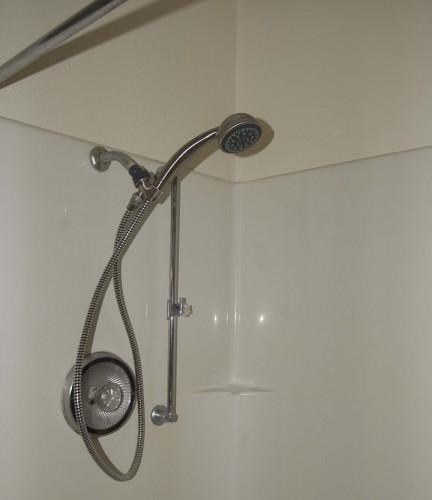 Spray painted the mail box. This was such a nice solution to jazzing up our mailbox. It’s a fine box, it’s just dingy. Instead of spending $10-$30 on a new box, I bought some “Hammer” finish spray paint for under $10. The added bonus is that every time I use the remaining paint, it brings that “redress” cost down a bit. I think I’m going to paint some plant boxes, some knobs, the address numbers, and whatever else could use some jazzing up with a faux metal finish! 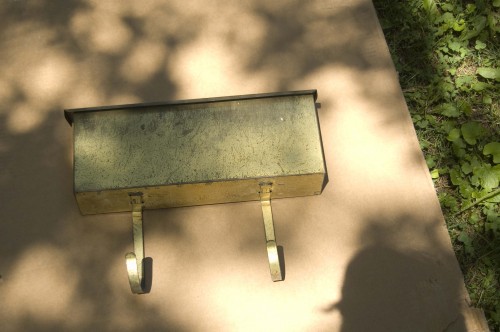 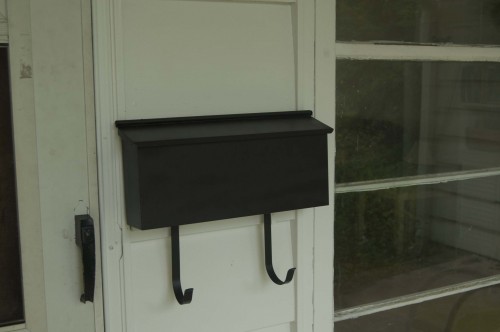 I put together one chair of the patio set. My parents had come home earlier that morning, around my breakfast time, with a sweet retro-style patio set and wheel barrow as a homewarming gift. I love it! 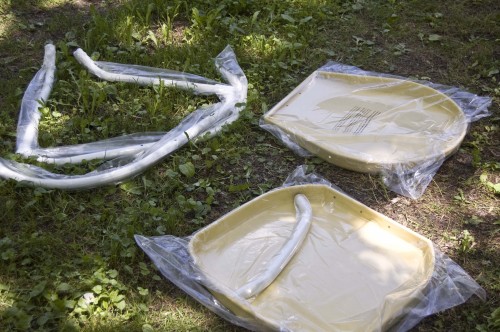 I made sandwiches all around and then we got started on the next round of projects.

Jason put together the rest of the chairs.

My mom rocked the gardening. She reclaimed some garden beds next to the house and planted a bunch of flowers we purchased earlier in the day. 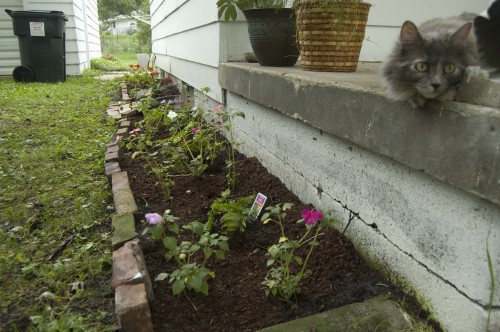 My dad moved on to the master bathroom’s door issue. The issue being there wasn’t one. I know a lot of couples wouldn’t have a problem with this, but Jason and I both like a little privacy when showering. Seriously. The other issue is that, yet again, the doorway is not a standard size and this time, without a door frame. My dad’s great solution was to notch a 2×4″ so we could hand the door in front of the doorway. Awesome! 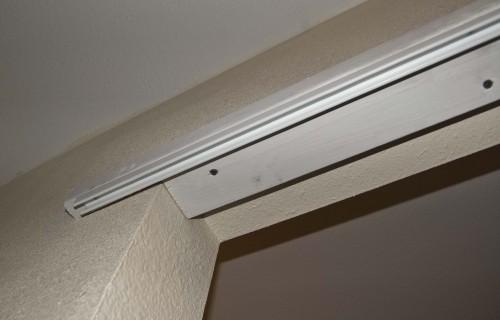 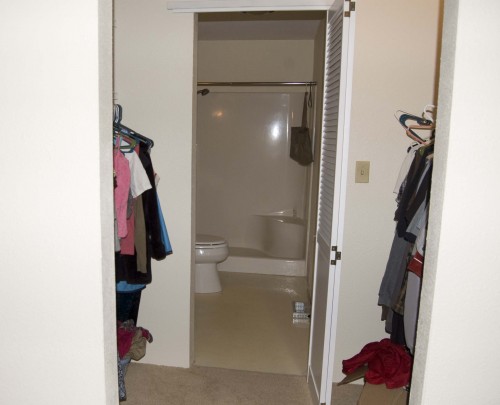 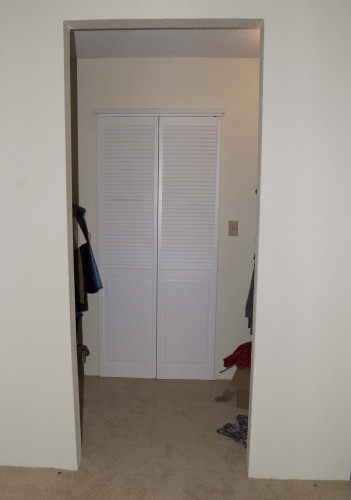 Now it just needs knobs, I can do that.

Once he finished that up, I got to work patching this huge hole in the wall. Check out those dry wall skills. Would you all like a tutorial on how to patch a gaping hole in dry wall? If so I’ll take photographs when I repair the gaping hole in the main bathroom. 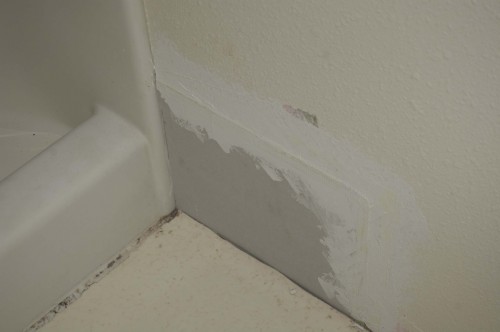 Jason and my Dad tackled the garden hose problem while I did some more laundry and helped my mom in the garden a bit.

This lead to me getting another shower in the basement and pulling out the wet vac again. You see we can’t completely turn off the water main to our house. It still comes out as a trickle. So here is what happened.

After going through about 4 nozzles, my dad finally had a memory flash about the time he had to fix the hose back at my folks house (circa 1989, I think). It’s actually a long pipe that’s hooked up inside the house so the pipe doesn’t freeze and burst in the winter. With the right part in hand they unscrewed the hose nozzle/pipe piece and they then realized that they had two male ends! No way to screw them together–or stop the water from flowing out of it for that matter. It was my lucky job to hold a bucket under the shower and try to catch what a could.

I had a flash of brillence and said “there was a shut off valve on the shower head I replaced this morning, it’s in the trash, it might just fit, I’m pretty sure it’s two female thread ends! 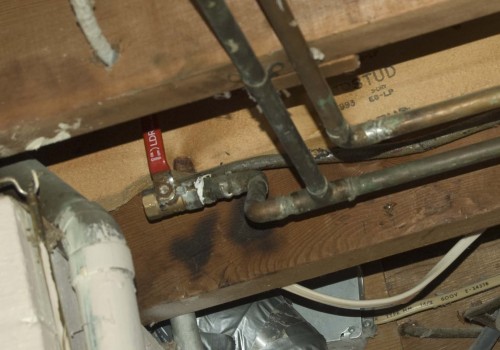 And it was! Hooray! The day was saved! Now we just need to get the right pipe length and we will be all set.

I repotted a plant. My mom and I finished the garden and started up the grill. A celebratory dinner was deserved. But wait, there’s more! After all that my dad and Jason mustered up enough energy to mount the tv to the wall. After which we watched an episode of Star Trek and as Lindsey finally realized she was indeed Kobali, I think we all communally fell asleep, haha. 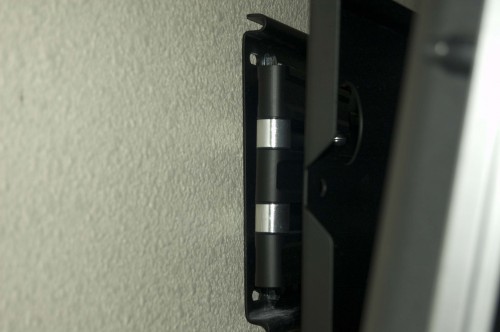 We woke up in the middle of the night to the biggest thunderstorm I’ve encountered while living in Ames so far. Our power–and therefore our sump pump–went out at 3am. Fun. The the cat got out and we couldn’t find her anywhere. After resolving that there was nothing we could do about the water in the basement (turned out okay in the morning) and recovering the cat, we all went back to bed. The power didn’t come back on until around 2pm Sunday. And thank goodness it did. There are still a few without power in Ames. Having been there while in DeKalb, I know how stressful and annoying that can be. Thankfully the heat hasn’t been too bad since the storm, so at least no heat stroke related issues. 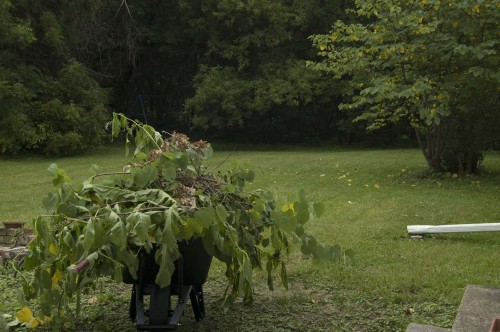 {all those trees are ours, which is awesome, but also a lot of work since they haven’t been looked after in many years + the storm}

Sunday we had a few friends join in the mess, we had a truck and loaded all the final things from the apartment into the garage and the spare bedroom. Now I have no idea where any of my stuff is, haha. We are going to go through a couple boxes a day until it all gets put away, it’s quite the project. We ended the day with grilling out, Southpark, and margaritas.

Whew, what a great weekend, and yet, I hope to not repeat it. Ever. Maybe just the parents and the tooling around the house and the grilling with friends part. Just no huge thunderstorms and moving.

Looking forward to this weekend’s projects – thinking those master bathroom knobs, the garden hose hook up, fixing some windows, maybe even making some screens for the living room – maybe I’ll do a cl show about that process. Seems like video would be easier to tell what’s going on than just pictures.

6 thoughts on “Home Redress: A Weekend of Projects and Moving”