You may or may not have seen all the hubbub on Twitter and Facebook, so I wanted to give a quick here’s what’s up. 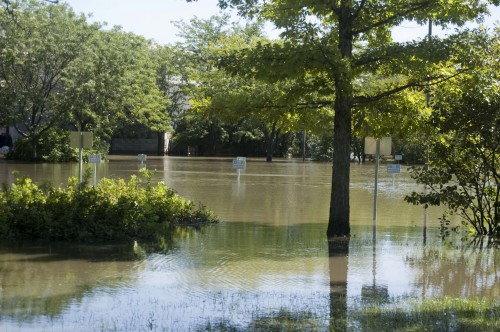 Last Tuesday Ames was hit with the another huge thunderstorm. It was enough to push the already elevated waters to flood levels and the town was cut off from most main roads, about a 1/4 of it was underwater, 200+ people were evacuated from their homes, and our sump pump thankfully kept chugging away and we luckily stayed pretty dry.

Unfortunately, a few water mains broke so on Wednesday we were without water and Thursday – last night we had a boil order because of possible water contamination. It really made me realize how lucky we are to have drinking water straight from our taps. Things are starting to get back to normal today and the whole town is starting the big clean up project. There is debris and rotting vegetation everywhere. 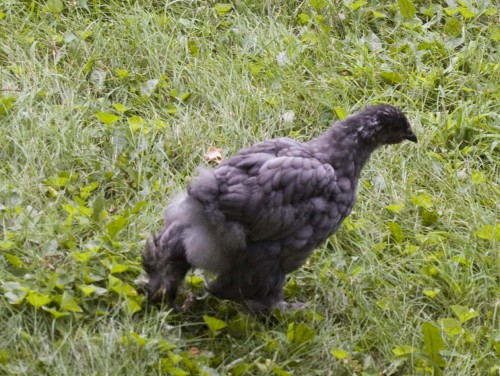 My friend Matt has been raising some chickens the last few years and this year he’s finally decided to take the plunge into full fledged sustainable farming. He has an apprenticeship for a year in Oregon (awesome!) where he’s going to learn the ins and outs of organic/sustainable farming. Originally his roommates were going to take care of his flock while he was gone, but that all changed when the house they were rented flooded. The two rooms in the basement are uninhabitable and everyone is going to have to move out – including his flock! Oh no!

Through random conversations, Matt knew that Jason and I were planning on raising hens for eggs starting next year. Well, he bumped up our timeline by offering us these sweet 6 week old chicks. We are going to give a home to 2 or 3 of them. Wednesday I’m going to post about the chicken coop Jason and I are building for them.

We heard a thud this morning, I jokingly said “ha, watch it be Sloane knocking my camera off the desk”. Walked into my room and there was my camera on the floor and Sloane hopping around acting like the champion of the world. Wow did I call that one. I’m not sure how I knew since she’s never gone after it before.

The camera works (thank goodness), and oddly enough the lens does too…. except the latch that keeps the lens on the camera broke. It should be of no consequence, but wow, what a bummer. I’m borrowing one of Jason’s lenses until I replace mine. He says I can use it as long as I stop letting Sloane borrow my camera. I think I stick to that agreement.

I’m in process of training for a 160 mile camping/cycling ride around central Iowa. If you dig cycling/camping/mini farming, you may just want to follow my other blog Kristinmroach.com. It’s more a mash of whatever I happen to be digging on any particular day. The posts are uneditted. I sometimes swear. My grammar can get pretty scary. And it’s about everything from riding my bike around town to attempting to farm in city limits.

I’m putting the finishing touches on my manuscript this month, so I’m going to a 3 times a week post schedule until the end of the month. It’s that insane “holy crap this is due in less than 2 weeks” crunch time. Today’s pattern will be the last new pattern until September (just two weeks so not so bad).

Okay, see you all soon!
Kristin