My Longest WIP: Getting back into weaving

Part of stash busting is to finish all my WIPs. Instead of posting all my WIPs at once, I’ve opted to post about one at a time. Focusing on each one, finishing it, and moving on to the next. Each WIP has a story to tell. Some will end up frogged. Some will end up finished. They will all be added to the WIP flickr set as part of the Stash Collection. I’ll post WIP projects as they come up. Sometimes once a week, sometimes once a month. Just depends how quickly I can finish them.

While the flooding last month was bad, one good thing did come out of it. The garage flooded causing us to immediately move my loom into the house so it wouldn’t get water damage. The plan all along was to set it up in the basement, but I wasn’t expecting to motivate Jason to help me move it for a long time. 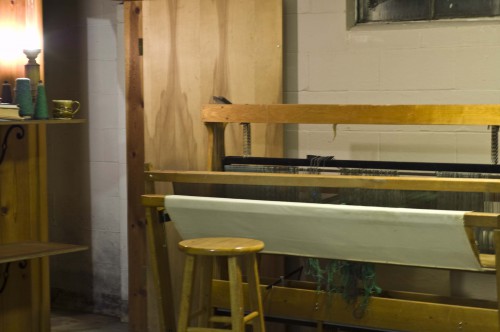 I’ve been really busy lately. One thing that has helped to keep me from being in a state of perpetual panic is to take an hour in the morning and do something with my hands. For awhile it was the chicken coop (pounding nails is excellent for stress). After that was finished I felt like something was missing from my daily routine. So last week, I started fussing around with the loom in the basement each morning.

My loom is pretty amazing. Not so much that it’s the “best” loom, more so because it’s my loom. And the way it came into my possession is a good story. I still can’t believe I got this 4 harness (can hold up to 10 harnesses) 60″ wide floor loom for free. I love it. Simply because it’s mine and allows me to weave. 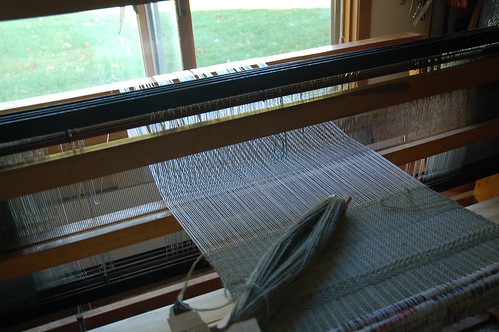 I finished my first project pretty quickly, a nice little scarf. It was a mix of plain weave and a simple twill. I was energized, on to the next project. Rosemary, the owner of the Rose Tree Fiber shop, let me use her warping board to measure out my warps – a nice mix of green and gray wool that I had purchased from the sale table. I brought it home and started winding the warp. That’s when the trouble started,it was such a tangled mess.

I had never worked with wool for warps before and stupidly thought, “I’ve warped with freaking wire, I can warp with anything.” Well, as much as wire shredded my hands, tangled, and was in general a literal pain, it was not a 2-ply thin, old weak wool. I swear, this stuff breaks if you look at it wrong.

So on top of the usual wool grabbiness, it also snapped. A lot. I think I broke over 20 warps while just winding it on. 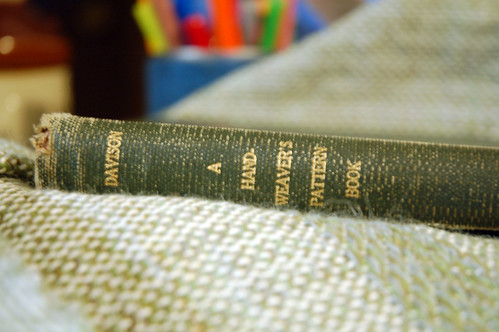 I thought, “I can deal with that. I’ll fix it when it gets around to the front. No big deal.” Beads of sweat were stippling my forehead at this point. I wanted to try a new drafting pattern so I could do the birds eye tweed set of patterns from the Handweaver’s Pattern Book, and I miss-threaded. But I didn’t realize I had messed it up until I had started threading the reed. That’s when I stopped working on the project. While I kept saying “I’ll sort it out” I was relieved when we moved the loom to the garage to make room for a dining room table. It took the pressure off.

I kept saying, “I’ll get back to it.” At one point, discouraged by my lack of use, I almost donated the whole thing to a local art center. But I kept thinking about the story of my loom and how even when she was giving me the loom, after 30 years of not using it, she was still sad to let it go. I don’t want to be that way. I love weaving. I’ve missed weaving. I was so excited to get a loom.

I realized what was holding me up was that mess of warp. I decided to give sorting it out a try, just a try. If it becomes a huge source of frustration, I have given myself permission to cut the warps off, buy some new warp, and reset.  That was a freeing decision. And Jason fully endorsed it which helped. In fact, seeing me struggle with it, he was like, “Do you want me to buy you some new warp? You don’t have to be so stressed about something you usually enjoy.” He’s pretty smart like that. 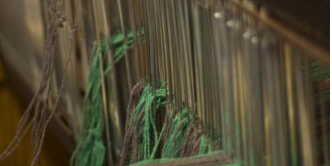 First, I had to sort out where I was in the mess. Heck, I had to figure out what my intentions were for the project. I couldn’t even remember what set of twill patterns I was attempting to draft for. After a quick look through past sketchbooks, I found my notes. I opted to transfer it to a new sketchbook so I can keep my weaving notes with the loom. And as it happened, my sister gave me a little sketch book when she came by on Monday, perfect.

And after just a couple of days working on it for an hour each morning, I sorted it. 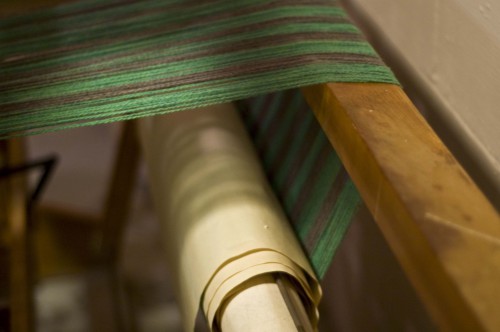 Look at that. Lovely warp. Lovely not tangled warp. 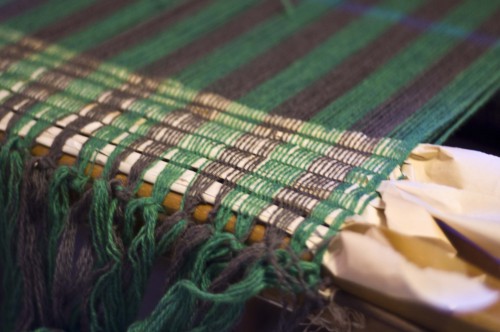 And this. I first tied the warp onto the back beam in November of 2008! Almost two years! Hooray! Take that! I will weave. I will weave a lot. I will put my loom to good use just like I promised. 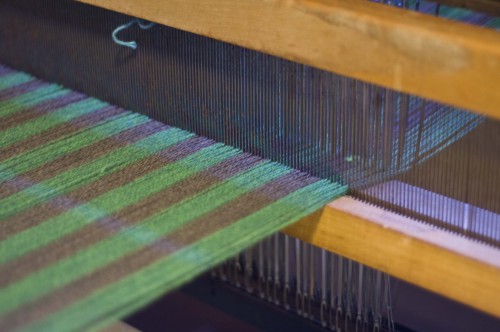 I can’t wait to tie up the shafts in the right order and get started on my sampler scarf… that’s been a work in progress for two years.

I feel like finishing my WIPs is important for three reasons. One, I enjoy the process. Two, I enjoy the space it frees up. Three, it makes room for new crafty adventures!

What’s the longest WIP in your craft closet? Why do you think you’ve let it sit there unfinished?

5 thoughts on “My Longest WIP: Getting back into weaving”