Hey there folks. Like usual, I had unusually high expectations of what I could get done yesterday after posting the pattern. Mainly I didn’t forgot about prepping for crafting with a friend as well as going to the Christmas knitting lock in at my lyc where I work. Woops! I did get all the pictures taken so it was pretty snappy getting things together today. I have to admit I got up a lot later than expected. All that late night crafting made me a little punch drunk. Or as an email from my friend this morning said “Kristin, I’m HUNG OVER!” haha. Oh drunk on the crafty goodness because the only drinking that was going on was some wonderful jasmine green tea.

Everything is up and you should go check it out. Some stuff has already sold (thank you!!) while I was updating, so I’m going to add some more tomorrow. and by tomorrow I meant to say Tuesday night because I neglected to think about the fact that I have finals! Duh!

We made a ton of bookmarks! Hooray! But you will see all of those on Wednesday. I did make a couple of these ornaments: 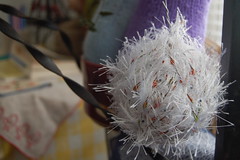 and this one, the other’s half brother on the mother’s side, can you see the resemblance?: 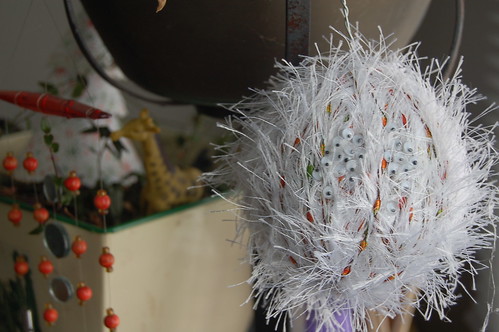 Oh and these are so easy to make too! Just tack down one end of the fun fur to the styro foam ball and wind it around until it’s covered. Then weave in the loose end of the yarn with a yarn needle. Slip some wire around the yarn, twist to secure it there, bend it into a hook, then go nuts with your hot glue gun and googley eyes, hehe. Oh they remind me the Gappers of Frip, maybe they are their orange cousins.

Here is a preview of the bookmarks, you totally can’t see them though, hahaha, just know that there were many made and it was a lot of fun. 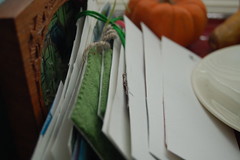 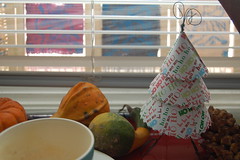 Oh and here is a great project to do, it was in the Better Homes and Garden Holiday Issue. It’s really fast and as her son put it “they look like they are dancing Mom.” Which I thought was about the best compliment to any crafting endeavor.

Well, I’m going to go make a late lunch and get my butt to the studio to work on some things there. Wow I can’t wait until my studio and craft room are combined! That will roooooock! I’m going to try out a new french onion soup recipe I found on the food network website. I love that site. Although I have serious doubts mine will look like theirs (the picture), but I can hope it will taste as good. I’m thinking a watercress salad would go nice with it too. Yum. I’m hungry, see you all tomorrow!

edited in 4:51 -> this is one of the best french onion soup recipes I have found thus far. I halved the recipe, added more flour than it called for and used croûtons instead of a baguette because that’s what I had on hand and it is just so tasty and good and warm and i will make it again soon. See ya!

One thought on “Shop Update and stuff”