Spring Fling :: The Altering of a Skirt Pattern :: Part I

I’m going to do a two in one post today so I don’t slam you with one huge post later tonight, haha. A preview of sorts of what I’m working on and where I’m going to be taking it.

After the post about organizing my fabric and wanting to make a skirt I have sense organized said fabric and designed my skirt. I had no idea what great stuff I had been hoarding for so long. Well, in this time of needed to keep a tight budget, it was a great rediscovery, haha. It was like I had gone out and indulged in great fabric and now have all these projects I want to make (or remembered that I wanted to make).

I really don’t want to buy a pattern for a skirt, but at the same time I want it to fit just so and make sure it fits just right. I turned to my book Sew U and it was just what I needed. 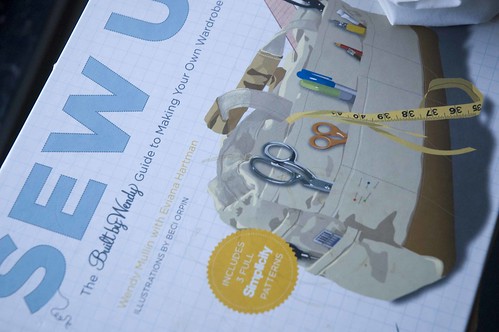 Wendy Mulin and Eviana Hartman have written a real gem here for the adventurous sewer (me). They give the basic sewing patterns for a shirt, a skirt, and pants. And then gives a ton of great information on how to alter those patterns to what you want for you. Perfect. And she has Project Tickets which I just love. I photo copied a bunch of them and keep the blanks in the book for later use. Here is the Skirt Project Ticket for this little spring fling skirt: 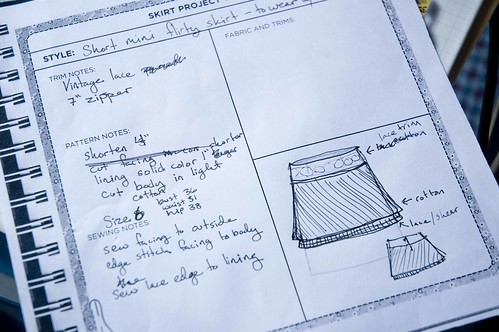 My idea is that I want a really cutesy short skirt that uses lace (which I have a ton of from my Grandma’s sewing stash, she loved Victorian era dresses/dolls/etc) and just really girly. I don’t have a lot of girly things, so I decided that is what I should make. And I want it to be kind of light and airy and short and pink. Haha. Over the top spring girl for me, but that’s okay. I want to be able to wear it with leggings, so if it’s a little shorter than I would normally wear a skirt I’m okay with that because the leggings will keep me decent. 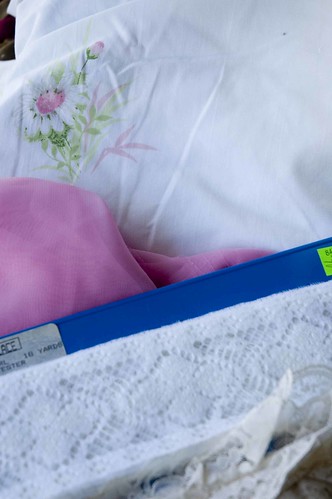 I’m using an old vintage bed sheet that is mostly white with pretty clusters of pink flowers for the main fabric. I’m going to use the lace to accent the waist band. And I’m going to do a rolled hem on the pink sheer fabric and have that kind of peaking out from under the skirt. The sheer will also function as a liner, but because the sheet is kind of thinner and white, I might add some white muslin in there as a more opaque liner.

So I’m going to go map out my pattern pieces on tracing paper, cut them out and start sewing things together. I’ll post again later today to let you know how it goes and what my process for making a pattern shorter and more flared is.

Sorry for the no post last night, but I think it was good for me to just let it go. Because once I made the decision to not post, I felt released to do what needed to get done – clean. And then I crafted it up a bit and chilled out with Jason and woke up refreshed and in a good mood. I think it wasn’t the post that was holding me up, I think it was the messy work space. So dishes were done, counters scrubbed, laundry put away (and since I did 7 loads on Monday that was a big thing). I was just feeling cramped and out of sorts. For me, keeping my workspace fairly open and tidy is huge for keeping me in a creative mood.