Sometimes, all a space needs is a good shake up, more so than new or refashioned or redressed accessories. It’s really great to take a look at the space you have and examine it. Think about what you need from the space. What are your goals? Moving around quite a bit in college and acquiring things over time both have the set backs. Mainly, things get crammed where ever they will fit and there isn’t much time to think about where would be the best place for them to go.

For instance, when I first moved out to ames, it was just 10 days after graduating, boxes were packed in a rush and dumped into Jason’s apartment. Setting up and organizing became secondary to just finding a place to shove everything. I kind of set up my studio. I kind of organized the kitchen stuff… but not really. So one year later I’m still working on making sense of all my possessions. This Saturday I had a major break though and made my studio into the studio space I need. On a daily basis I use my computer the most and draw and paint the second most. My studio should be reflecting that. And now it does! 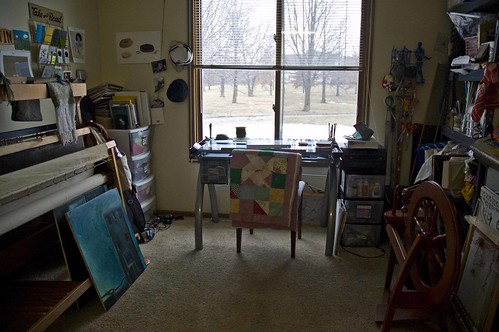 Do you notice how the loom and wheel aren’t really in active use? The wheel being kind of in way and the loom having things leaning against it? And even though the space is much more open than it was before I rearranged it like this incarnation, it is still really cluttered. My tool rack is overloaded, there is stuff jetting out from the shelves. It’s still kind of cramped and has a “cave” feeling. It was also so easy for it to get overly cluttered, cramped, and stifling. There just was too much stuff for the space. 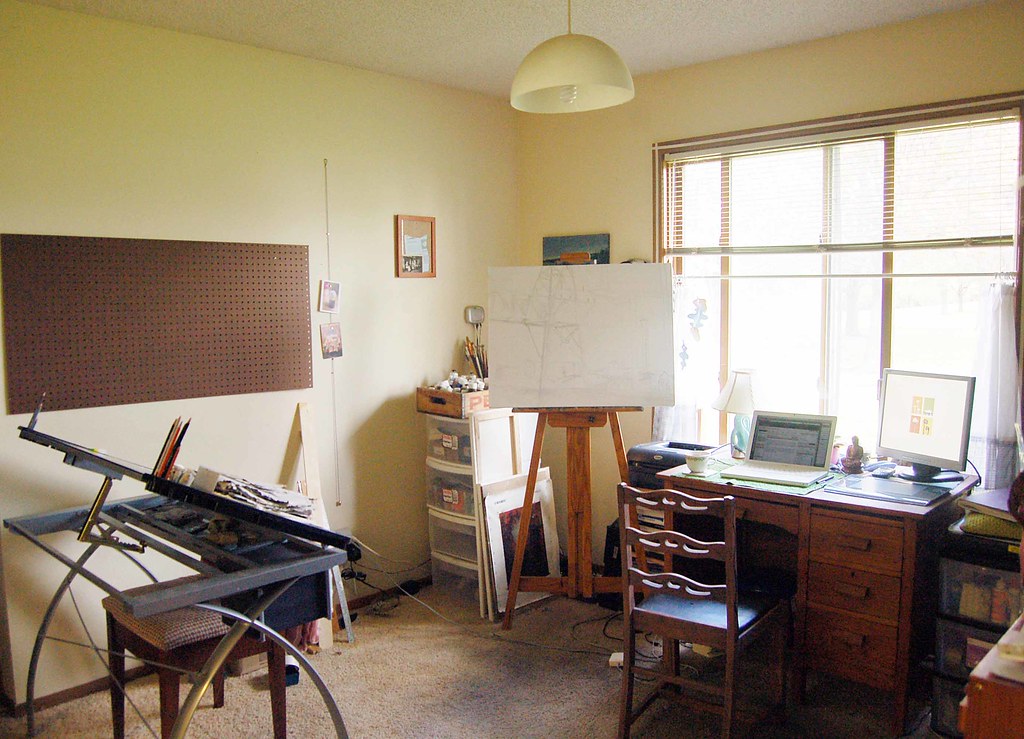 With moving the loom out and a second desk and my easel in, I’ve been able to set up a more open, useful space. Instead of using my drafting table as my computer desk, which leaves it inoperable as a drafting table, I have a desk just for my computer, monitor, and wacom tablet. It makes it easier for me use my wacom tablet (not having to get it out every time I want to use it), which helps my wrists and my productivity. I’m more likely to just open up photoshop and start drawing vs procrastinating. And I’m now more likely to sit down and draw at the drafting table. I spent most of Sunday painting and drawing for the first time in months and that was thrilling.

While there is still some clutter, that will be all taken care of once I get a dry wall screw mount for the peg board (it fell on Saturday and I’m not going to put stuff back on it until it’s hung properly). I also want to put some shelves up above the peg board to put my supplies for kit making/dyeing/ and other things that the pets shouldn’t be getting into. I also have a shelf just for my art/craft books in my studio now (on the right out of the picture) which is a constant source of inspiration. A rug would be really nice for aesthetic reasons and I’m also framing some drawings I did to hang on the wall over by my paints. I want to keep my space clean and inspiring and that includes the walls.

Something that I didn’t even think of until the space was reorganized was that when I enter the space and sit down to work, it feels like a workspace for the first time ever. It’s been another step in the right direction towards taking my work and my work schedule more seriously.

How are you using your space and does it’s set up contradict that space?