Knitting Machines have interested me ever since learning to knit. The speed, the ease, the speed. Is it really easy though? And is it really actually fast? Well both of those things depend on two things. What you are making and what machine you are making it on. Jason in particular has been really curious about them, actually more than me now that I think about it. We have been talking about getting one off and on for me for a long time and today I was very tempted to buy a “The Ultimate Knitting Machine! by Bond America!” knitting machine while at Joann’s. I had my 40% off coupon. I had the money. But what if I got it home and it was less than “ULTIMATE!!!!!” And also, what if I could just get one used on ebay (which I would prefer anyway). I decided to do some research, see how it works, what you can make with it, what people say about it, and see what else was out there. 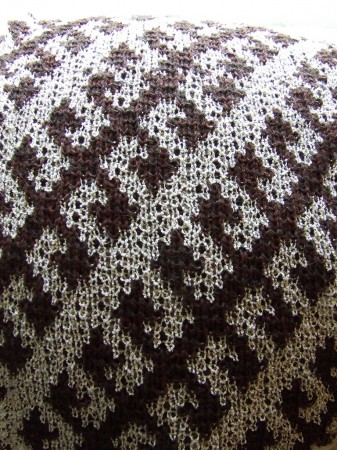 (This great knit design is part of the Machine Knitters Flickr Group and was posted by staceyjoy.)

My first stop was YouTube. I thought maybe I could see this baby in action. Well could I ever! The whole video that comes with the Ultimate Knitting Machine had been parsed up and added to YouTube as a series of Lessons, here is the intro. Granted the sweaters she is making are pretty “interesting”, but I got a good idea of what is involved. It seems to work well enough, just absolutely no bells and whistles. None at all. Pretty much if you want to do anything but stockinette stitch it comes by way of manual manipulation. Which isn’t really bad, it just is what it is. Like if you want to do a two by two rib, well, just watch this and you will see. Still faster than hand knitting though.

Then I came across this video which was pretty funny I thought and also gave the info that the UKM was really finicky, prone to jamming up, and dropping stitches. Hmm. Well, it looks like it still wasn’t bad, just touchy. Most likely just need to learn how to use it and weight it to avoid issues like that. Maybe it’s just not completely mindless knitting.

Here is another look at the Singer knitting machine. It goes into detail about using it, what’s all included and etc.

There are all sorts of knitting machines, the Bond and the Singer are just two of about 5+ main ones that seem to be in common use. Brother makes one similar to the singer and then of course these are just the more “hobby” ones. There are ones that use punch cards to create more complicated stitch patterns with ease. Fully computerized ones that you can just program and let fly. 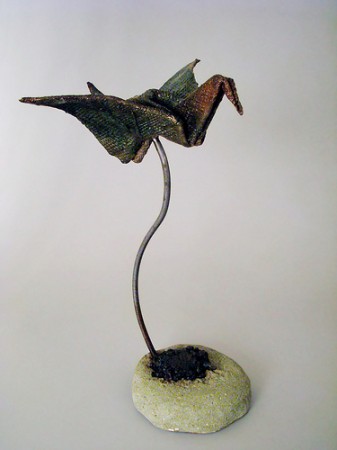 This artist formed the knit fabric into an origami crane and cast it in bronze. Very interesting indeed. That’s the same method I used to make crocheted silver sterling rings. Lost wax casting I believe.

Speaking of artists who knit, the person who got me thinking about knitting as an art medium in the first place was Lisa Anne Auerbach. Which I’m sure would have happened all on its own eventually, but seeing her work and reading about how she just got things moving a little faster. She does these amazing sweater/skirt sets as well as knit panel pieces. Like this: 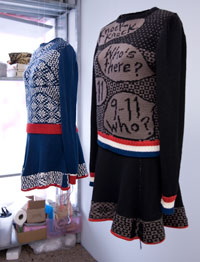 Lately I’ve been thinking a lot about my next project in the studio and I have a few ideas and they are in one way or another involving knitting.

So after crunching the numbers, doing the research, looking on ebay, I’ve decided that the Bond (admittedly not “ultimate” like they claim) is a pretty good buy (especially the next time that 40% coupon comes around) and a good place to get started working with knitting machines. (I’ll get a Brother or Singer if I can at a similar price though). If I find in a year that I’ve outgrown it. It seems to hold its value well enough that I could sell it and apply that money to an upgrade.

Do you have a knitting machine? How do you like it? what would you recommend for a newbie? want to trade it for a 4 harness table loom? Just throwing that last one out there, haha.

One this is for sure, a knitting machine reminds me much more of weaving than of knitting. So I think I will get along with it really well.

Knitting Shorties on the Bond

On another note, make sure to go vote today! What you do does matter, so go do something and vote! Jason and I and our friend are going to have a big breakfast, take a snack and step in line tomorrow. We are making a morning of it. Then we are going to watch the election come in after he get’s off work and weather proof the apartment. Good times, good times.

Have a good day and keep it crafty!
Kristin