Thrift Kitchen: Sneaking in the Veggies 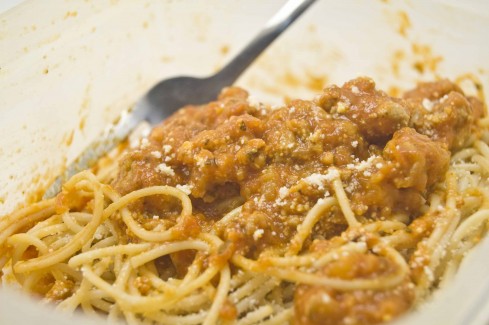 Jason is pretty picky about his veggies–not too chunky, not too soft, not too uncooked. Bah. What a pain. When I make spaghetti, I love to fill it with veggies so it’s a nice hearty meal. But if I do, then he won’t like it. He will eat it, but he won’t really enjoy it. Well, crap.

I took a lesson from the The Sneaky Chef: How to Cheat on Your Man (In the Kitchen!)

cookbook that I got a few months ago and started hiding the veggies in my sauces.

I used to just dice them up, give them a little saute and toss them in to whatever sauce I was working on. Well, he doesn’t really care for the chunkiness, so I’ve come up with a new plan.

I dice them up, give them a little saute, toss them into the sauce, and then blend it up!

I discovered we have an immersion blender a few months ago and have been using it ever sense. 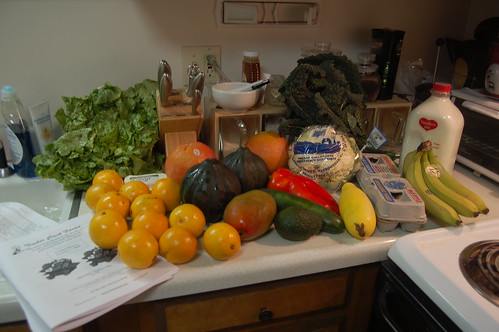 {delivery from the farm co op in dekalb, sure do miss that! main point is that I love my veggies}

This is a great trick for extending condiments too. Add a little cauliflower puree to the ketchup,  honey mustard, or bbq sauce. Add zucchini to white sauces or broccoli to dark colored sauces. Or use whatever you prefer for your sauce.

And sometimes it really is just a texture thing more than a taste thing. So blending up whatever you would normally add to a sauce so it doesn’t “look” so veggie filled.

While I’m of the opinion that veggies are the best food on earth in any form, I know kids and/or partners may not be of the same opinion. Blending it up is an easy way to sneak it in and make sure those you love are still getting their allotted servings each day.

And of course I have to point this last little factoid out: blending veggies is a great way to use up the last bits of anything looking overly ripe. Just toss it in whatever your are making for dinner and you are all set. No food wasted, more veggies in your belly. It’s a win win.

4 thoughts on “Thrift Kitchen: Sneaking in the Veggies”