I met Beth about a year ago at the local yarn shop where I worked, she was always wearing these fabulous knit dresses and wonderfully creative clothes. We always got on well, but it wasn’t until Earth Day when I saw her booth at the Earth Day festival on campus that I realized she had an etsy shop and sold her own yarn and knit hats and prints and did ceramics too! What a dynamo! We started hanging out and it’s been so fun getting to know her and see her spring into action and self employment. So without further delay I would like to introduce you to my friend Beth and her wonderful work and life. She lives in DeKalb, IL. You can visit her shop here and her blog here.

What’s your favorite medium to work in?
Oooh that is a tough one. Any given day I might be trying something new or going back to something that I had abandoned. I can give a list of stuff I work in though. There are SOME things I don’t do after all.
My latest projects have all been knitting, mainly hats in recycled yarns (which I NEED TO FINISH). I have some projects planned that include making some vintage tin badges I found at a garage sale into belt buckles, working on some wood block prints, and making jewelry out of the leftovers from frogging sweaters for yarn. So ok, I was supposed to say favorite materials… Silk, cotton, cashmere and angora blends are some of my favorite yarns. I like vintage materials, odds and ends in interesting styles. I also love terra cotta clay. It has a lovely earthy richness.

When did you first learn to knit? Who taught you?
I first learned to knit in a class taught by Lindsay Obermeyer, a pretty well known fiber artist. You can check out a little of her work in the summer 2006 issue of Knit.1 Anyway she was heading the Fibers department at NIU for a year while the main professor was on sabbatical. So I took one of her classes as an elective and in the class we learned how to make a few kinds of beadwork, how to make netting and how to knit. I had a lot of trouble at first with it, but pretty soon I was off. After the required samplers the first thing that I knit was a hat. I really really stuck with knitting in (a) way other crafts and arts had not grabbed my attention. I tend to get frustrated and bored with a lot of things. I’ve always been one of those people who has to do things my way or the highway and I don’t care much for procedure so the first thing I bought was a stitch dictionary and set about learning how to read the directions so I could apply the patterns to things I want to knit. It took me a year to learn how to read patterns. I made a lot of mistakes, but I still have quite a few of those first things that I knit. 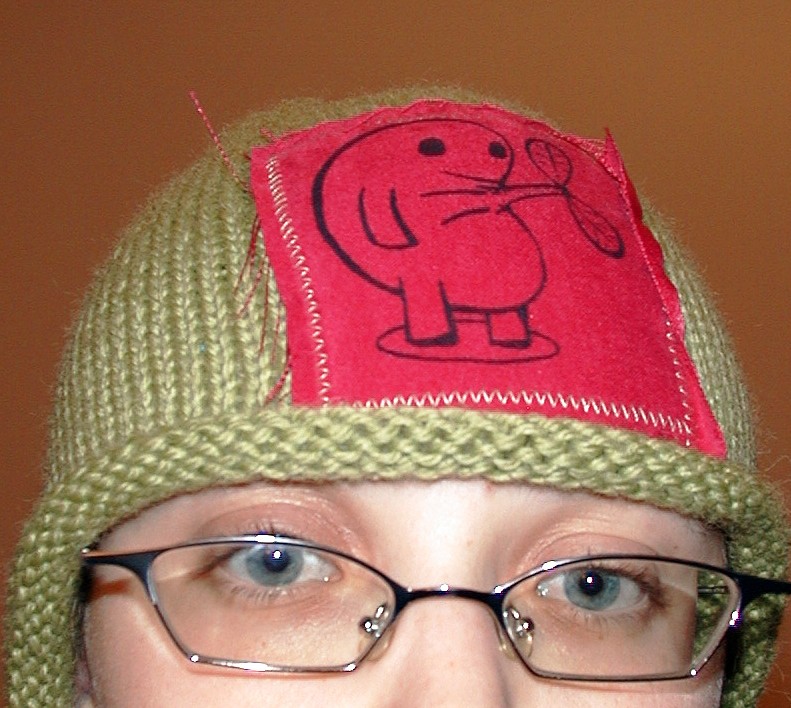 How did you come up with the name for your shop? And how does it relate to what you sell?
Ahhh the name of my shop. After I decided I wanted an Etsy store I knew I HAD to have a great name. Something that spoke to philosophy but wasn’t constraining so I wouldn’t feel the need to set up a different shop at some point in the future because I chose (the wrong) name. So I sat down with the thesaurus on my computer and an idea that I wanted two contrasting words one that meant taking apart and one that meant rebuilding, so I went through about a million permutations of the idea with different words till I found one that said what I wanted and easily rolled off my tongue. Therefore: defaceReconstruct. I made it one word because it looked cool. It really relates to all of my products because, really in order to make ANYTHING you have to take something apart. You have to dig clay and metals out of the ground, you have to shear the sheep, you have to cut down the tree. I have always had an attraction to reduction. What is the simplest way to produce something, starting with its base elements. I have always wanted to own a sheep and take the fiber from that animal to make into yarn to make into and garment or accessory. I have my hands on all of the chain. This is obviously not practical at this time of my life,… but I try to take these attractions and principles into the things I do produce. I think reusing old things is almost as good.

What first made you think to recycle yarn to resell?
I had heard of it a couple of years ago as a cheap way to get nice yarn and as I had a pretty fiendish yarn habit I thought this sounded great. So I went to the Salvation Army and picked out a bright green heathered sweater to frog. It prompty stayed in its original bag for a year and a half. Yeah… it took me a while to get around to it. So in March of this year I finally got around to taking apart that sweater. It was not in the best condition the yarn had MANY weak points and was a little brittle from being worn. But I was hooked. I loved taking apart something crappy and gaining something great out of it. For the record I kept that yarn and have made several lovely already broken in hats out of it. So in April I got a random Convo on my neglected Etsy store that had three lonely hats in it from a girl named Cassie asking if I would like to participate in an Eco Art Fair for Earth Day. I didn’t have ANYTHING to sell. I’d been depressed for the last year or so and hadn’t made any artwork or crafts. So I had a lightbulb and thought, I’ll buy some sweaters and sell the yarn at the fair. And so it began. I got a pretty good response at the fair and have taken it forward from there. 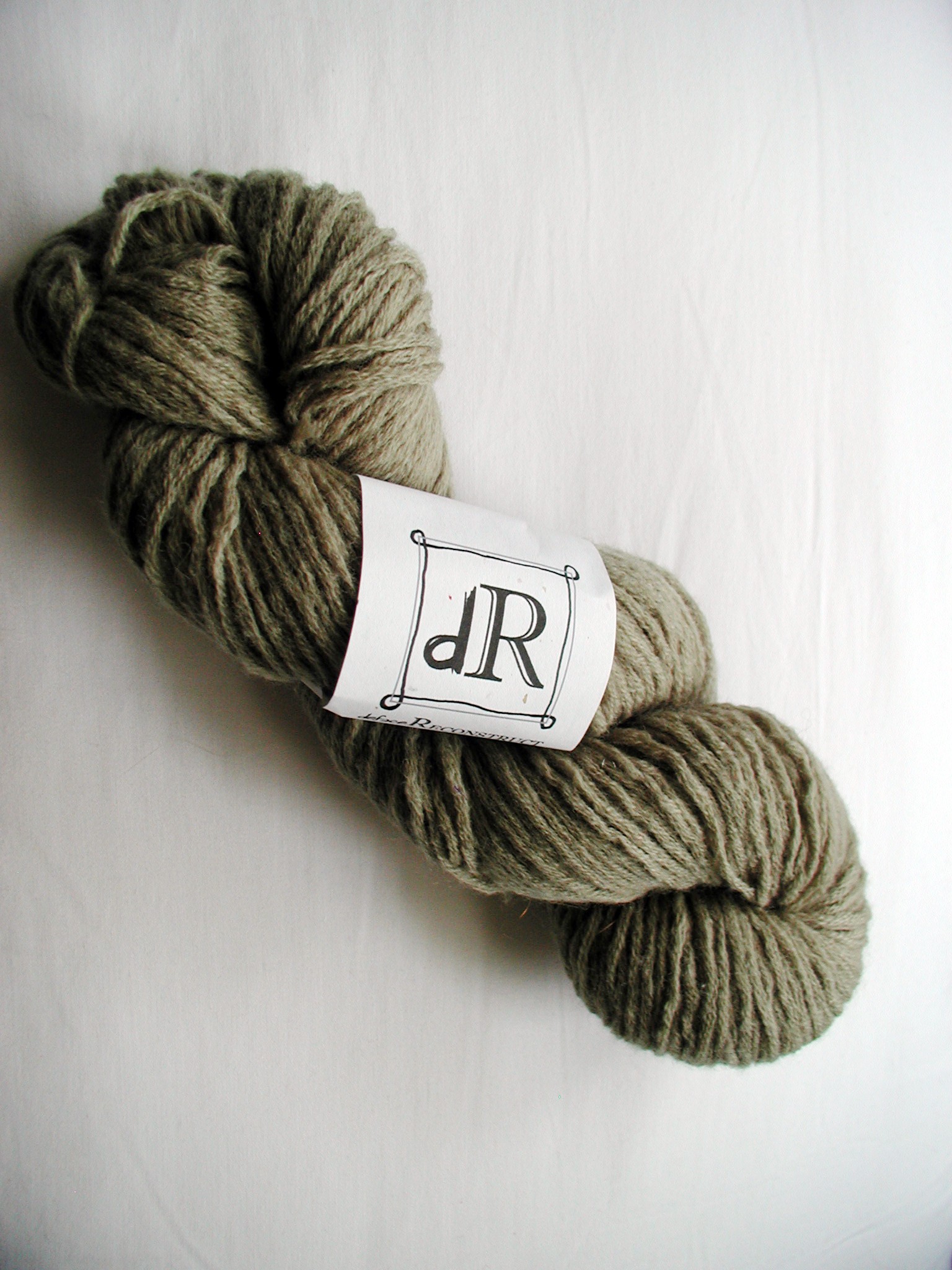 How did you come up with your Green Bean? Does it speak to the idea of being green by using recycled materials? You mean sprouting bean?
Hahahah oh geez, its a little embarrassing how that got invented, but I’ll tell. I once drew a little doodle of a legless armless woman with a bonnet on looking at a baby on the ground. I liked the way the woman looked so much that later, when thinking of things to draw for my printmaking class, I gave it arms and legs and called it Bean Baby. I made a large print of bean baby sleeping inside a sprouting bean. I took the sprouting bean and gave it arms legs and eyes and the sprouting bean was born. There is a whole little theology with these characters that includes an ear of corn with a halo that is god. That was a strange time in my life. Heh. I’m not sure that I specifically connect it with being green so much as just a simpler feeling of anthropomorphized (ten dollar word) nature. 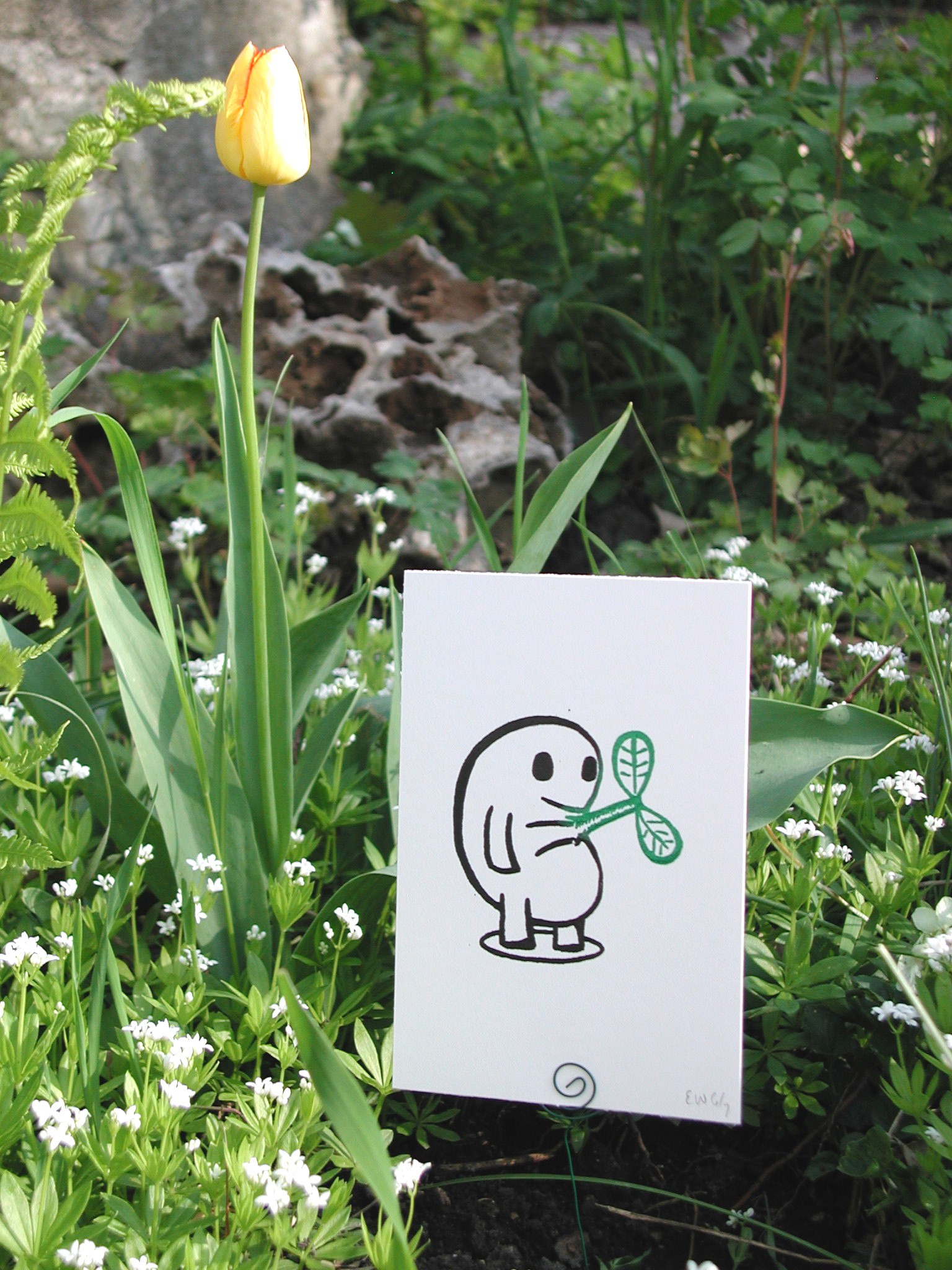 In your profile you say that you are working on writing up some patterns, a wonderful idea! I like they way you phrase that you desire to share the creativity. Any idea when we might see the first patterns for sale?
Within the next month or so. I’m making basic patterns with ideas for personalized embellishments so I still have to work on the embellishments part, but I’m getting close. I also have a secret collaborative project in the works, but I’ll be mum about that for the time being. I think sometimes people have a hard time envisioning what they might do with recycled yarn, so I want to share my ideas for that.

What goals do you have for your shop? yourself?
I’m hoping to make at least a living wage working for myself. Obviously I want to do as well as I can, but to at least make enough money to pay my own bills and put a little away would be my wildest dream at the moment. I dream big ;)
I’m hoping my shop grows and breathes and gets a life of its own. Sometimes goals are all well and good, but there are also times you have to follow the rabbit down the hole and drink the potion. I think I’m drinking the potion right now. Haha.
Anyway, I’m hoping to give back to the world a little bit by bringing high quality recycled yarns to people on a budget, who enjoy fine fibers. I want to supply other crafters who are interested in using recycled products, but hesitate to recycle them themselves. As for my non-shop related goals I’m hoping to travel a bit more by train, maybe make it to Europe again at some point. I’m also filled with lust for a tiny little house of our own. I want a garden and dog and a work shed in the backyard and maybe a kid someday before my ovaries stop working. That’s pretty maybe on the kid, but I think I’d want one at some point. Who knows? 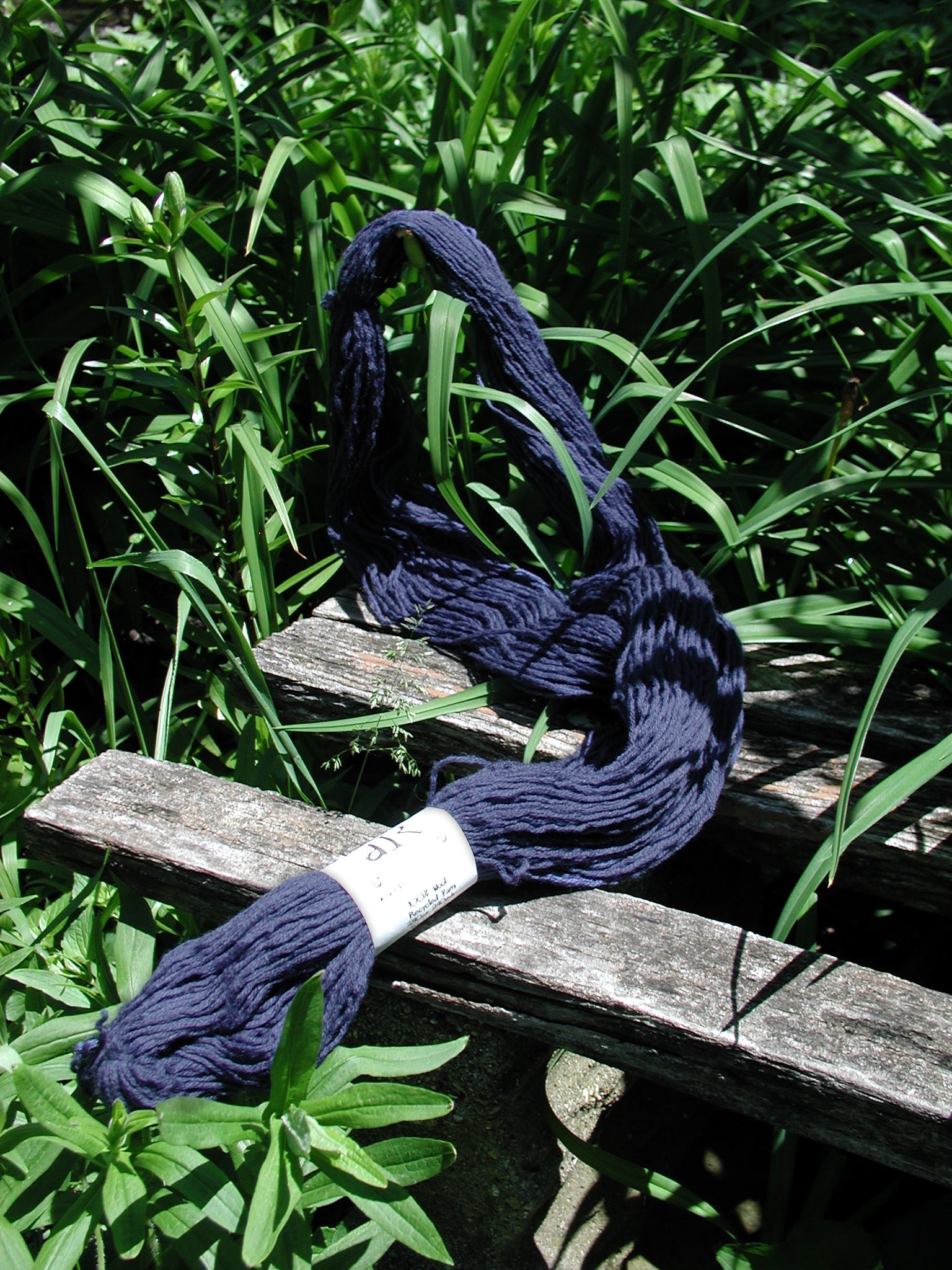 One thought on “deface Reconstruct : an interview with Beth Wolden”

Quilter’s Cashe :: A Jackpot of a quilting resource