Wowzers! I have been so happy and inspired all day by all the awesome ideas (and confessions) of storage solutions for needles. It sounds like some have it under control while the rest of us are just resolved to deal with it on a project by project basis. This morning I woke up to quite a few comments and it got me going right away. 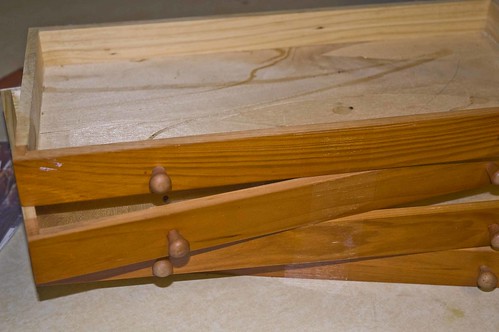 First I cleaned out all the drawers – they were filled with crap art supplies – like lower than student grade, so I never even looked in there for anything. Not a good use of such a nice set of drawers.

Then I dug around to find something to line them with (I’m not sure why, but I felt this was a very important step). I found this contact sheet craft fabric stuff. I have moved with this 3 times now and always say “I’ll use it! I’m not going to give it up yet!” Well now that’s a justified responce because I did end up using it and I love the way it turned out. Watch out future hoarding. 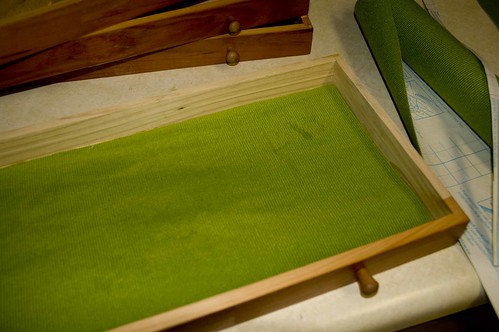 I cut it down and made sure it fit, then I cut out 3 more pieces of the same size and made sure all those fit too. Off came the contact paper and in they went. It went really smoothly until the last one which stuck to itself and was in general a huge pain in the ass. I won the battle with it though and in it went at last. Ha, take that sticky craft fabric bright green cordurouy stuff! (how in the world did i just spell cordurouy off the top of my head and get it right on the first try – booya! – which i probably just misspelled). 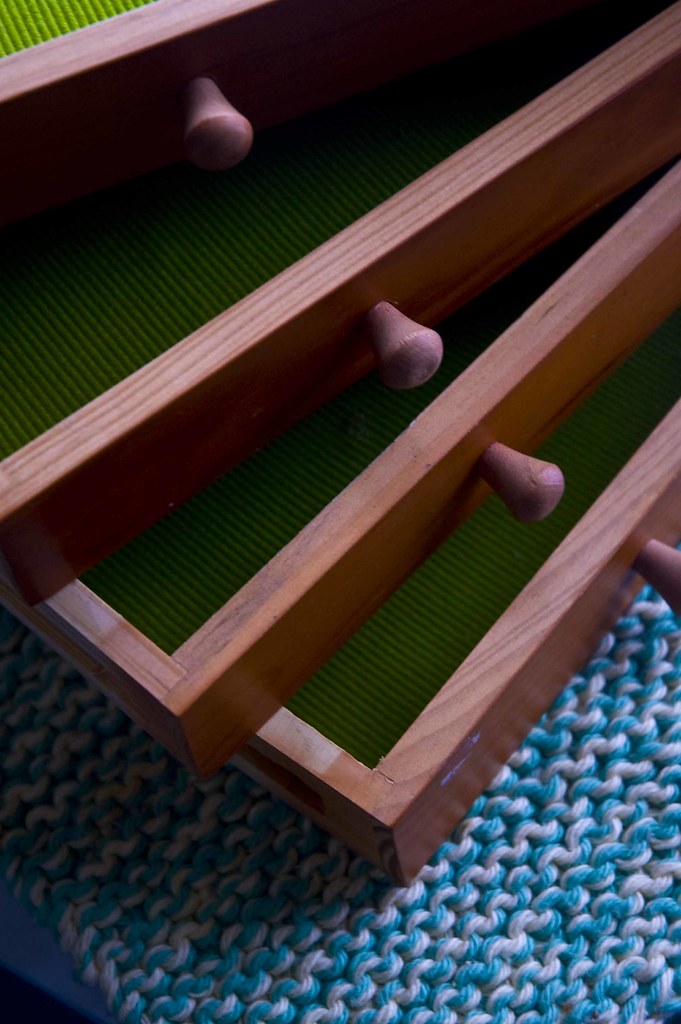 And then I promptly dug around for all my double pointed needles and crochet hooks and loaded it up. I temporarily put the circulars in there too – or mostly the packaging – until I get something worked out for them. 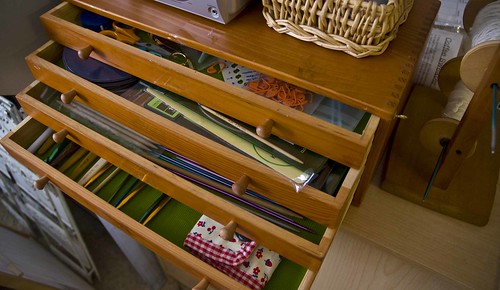 It’s great having a place to put all my stitch markers instead of just putting them into random little pouches and bags and cubby holes. 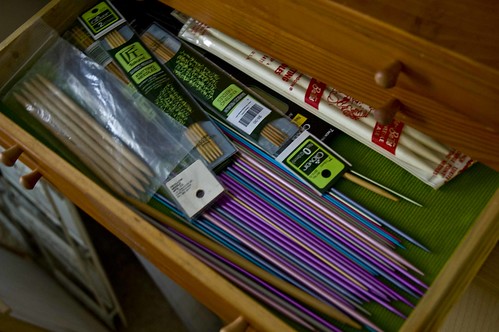 I’ve come up with a great idea for the loose dpns in this drawer, but that will come later this week. Maybe Thursday. 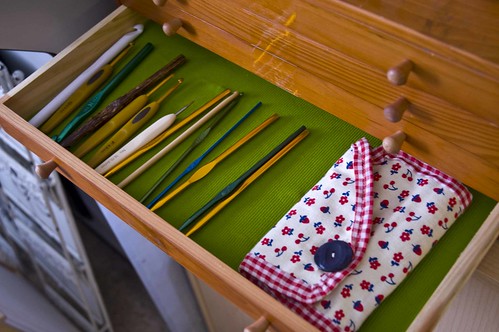 I know I have more hooks than this around the apartment, but I can’t find them anywhere. I think the rosewood and clover soft touch are my favorites. 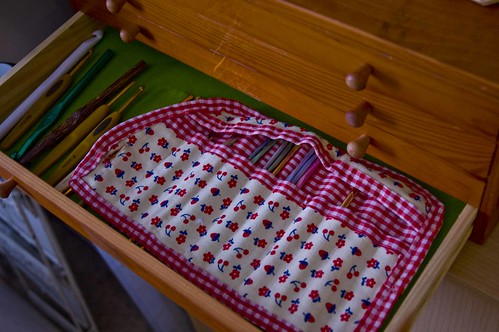 I decided to keep all my vintage needles which are hard to tell the size of in my hook clutch according to size. I realize now I have about six size G and four H. Yikes. Granted I only bought two of them and one was an upgrade to the soft touch one.

I have a couple announcements – I didn’t realize until after I posted it that I forgot to put the hook letter sizes on the chart, so I fixed it promptly on the downloads and that’s all set, but I’ve not had time to fix the jpgs for the post – and most likely won’t until later this week after I get this week’s pattern up. The pdf and the Excel files are both corrected though. Sorry about that.

Second, and this is a big one, the server I’m on is having scheduled maintainence on the 18th and 24th, so it might be spotty getting on. And in general the server has sucked lately and there has been a lot of times I’ve tried to log onto Craft Leftovers and it just doesn’t show up. And so I’m imagining it must be going down pretty often. Annoy. So if these updates to their code don’t fix it I’ll be moving Craft Leftovers to a new server service. Main point, if the site is down (usually it times out and just doesn’t load), email me at Kristin [at] craftleftovers [dot] com. This will help me keep track of how much it’s going down so I can make the decision to move or stay. – speaking of I just about lost this whole post when I went to publish it because the site all of a sudden went down – thank goodness for the autosave on wordpress!

Thirdly, I didn’t realize I had posted the zine only for the same price as the full one month subscription. Yikes! Thanks to my friend Carolyn for giving me the heads up yesterday “did you mean to list that at 10.95?” No way! It’s back to the right price, so if you were put off by that, go check it out again. And speaking of that, I’m off to do some final editing on the zine and get it all set to print, assemble, package, and send out.