Yesterday morning while running errands I stopped in to Borders to use up the rest of my gift card from Christmas. I wanted to get a magazine and a coffee. I passed on knitting magazines because as much as I love them I tend not to use the patterns because, well, I always end up just writing them myself. Truth be told I have only sewn from patterns a few times. I can actually count on one hand the times I’ve actually cut out the pattern pieces, the fabric, followed the instructions, and made something that I love. The thing is, I wear those things still. A dress. A skirt. A shirt. I’ve made a skirt for my sister too and a dress that was my first official sewing project when I was a kid. I love sewing. I have written quite a few sewing patterns. Bags, wallets, totes, clutches, plushies. All things I make. Well. I want to make clothing. Like pants and skirts and skirts. I think I could write up my own patterns for those, but why reinvent the wheel. I think it’s time to start following the pattern – mostly.

I don’t like doing “new year resolutions” because if it’s something I really want to change/do/start/etc I should just start it and not wait for the new year. Well it’s new years eve and I have the time, so I’m starting and changing and doing something. First, I’m starting to make my own clothes. I’m going to try to make a new item twice a month. And I’m changing something. I’m going to Stop Shopping and Start Sewing (and knitting). I have enough fabric and yarn to make myself a full wardrobe. No reason I should be spending money. And I’m going to do something. I’m going to stretch myself and learn new sewing skills with each garment I make. 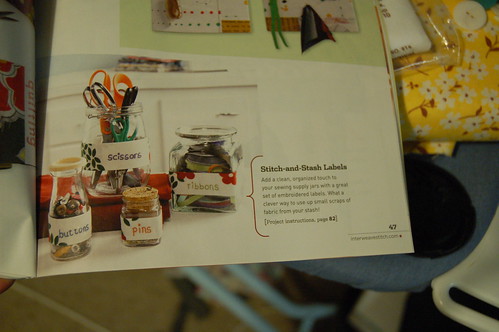 So this was all going through my head when I came across the premiere issue of Interweave’s newest addition to their publication family: Stitch! It’s a great publication. It has a lot of smaller things to make as gifts. Some great reviews of books and magazines and products. An article on organic fabrics and sewing notations. And then there are quite a few really cute skirt patterns. Perfect! I want to make a skirt!

I brought it home, picked out some stretch denim I had bought – ohhhh – about 2 years ago, some cotton fabric, interfacing, and some buttons. 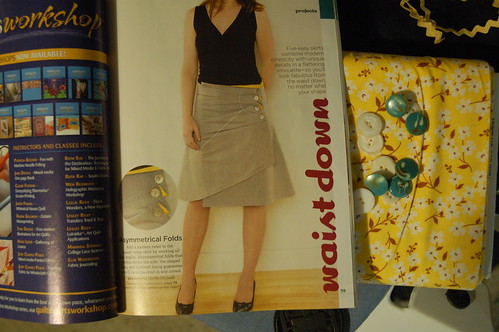 Honestly, being the first time I’ve made a pattern from a magazine, and about a year since I made a sewing project from a pattern; I was a little bit overwhelmed when I first took a look at the pattern insert. 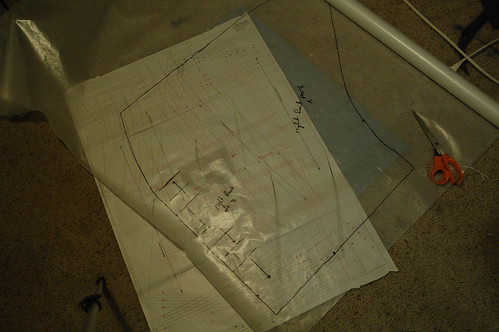 I figured it out though and had all the pieces traced out in about an hour. I’m not sure where this paper came from or what it official for. It was left in my studio space at school when someone left and I took it with me when I left. A big roll of semi transparent wax paper just seemed like a good thing to have at the time… and I turned out to be correct. 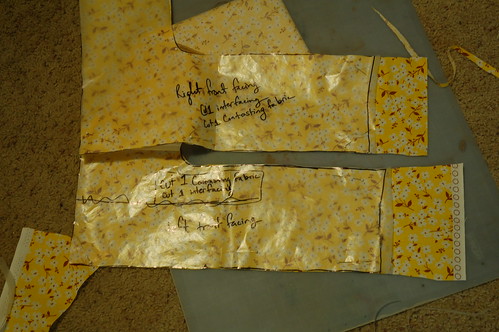 Then I cut out the fabric and started sewing things together. I was a little slower than most people would have been. 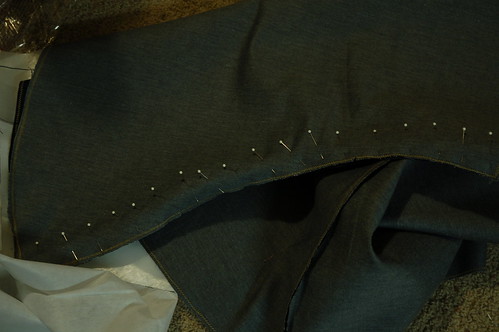 It had been about 5 hours since starting the project at this point: 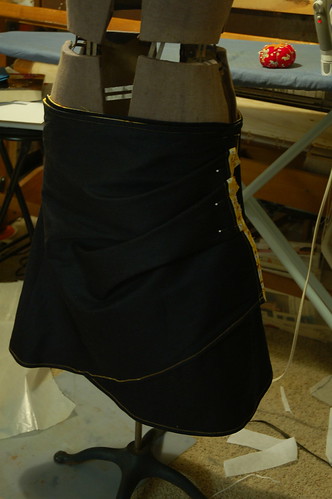 And that’s when I decided to go to bed and post and update last night. This morning I got up a little later than usual, made the button holes, and sewed on the buttons. 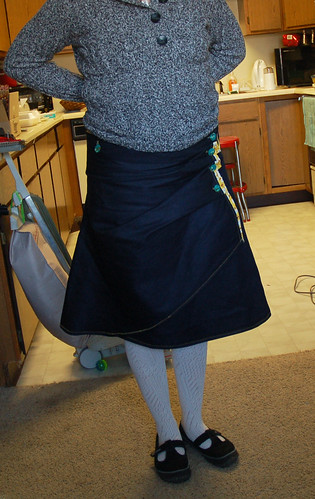 I was doing some hard core cleaning yesterday morning when the vacuum imploded (insides shattered). Oh and that button on the left should be facing in, but I liked it so much that I put it facing out. I also trimmed the edge so more of the yellow fabric is visible and I used contrasting instead of matching thread for the hem line. 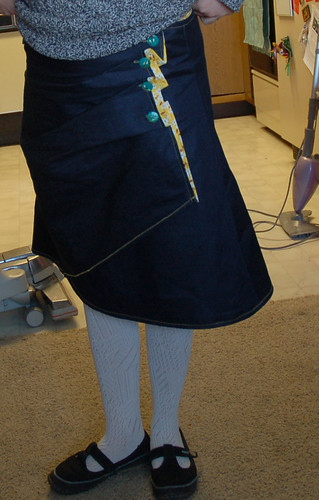 There were two things I found. One, the skirt is too big. It doesn’t fall off or anything like that, but sits lower on my hips than I would like and it’s a lot longer than I thought it would be. It was like xs on a 6 foot model looked perfect, but they made the medium for us 5’4″ girls who wear size 6 pants like 4 inches longer. It was just strange how much length was added. So I’m going to move the buttons over a bit and just trim like 4 inches off the bottom and redo the hem. Easy fix.

The other thing is that there is an error in the pattern, which I chanced to look up (not usual protocal) before starting thank goodness. And I’m not sure exactly what was going on, but it also seemed like Left part A and part B were two different length, but I could have just done that part wrong because of all the line going everywhere and me being tired.

Right now it looks cute (not with this sweater, I was cold and so I put on a sweater), but it doesn’t look as cute as I think it could be. So I’ll fuss with it again tomorrow and do the alterations I mentioned above. 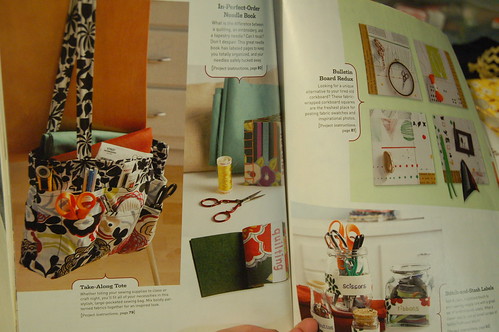 (I think I’m going to make that tote and needle book, so neat!)

Overall I really liked the magazine. It has some really cute classic looking skirts with interesting but not trendy/flashy finishings. Some really nice smaller projects including a pillow by my favorite artist Lisa Congdon. Then it’s rounded out with some great reviews and articles on contemporary sewing issues and trends. I like it so much I might just, maybe, someday, consider the idea of getting a subscription. I want to see what the second issue is like though. 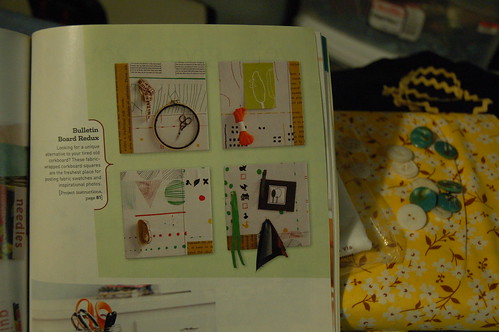 These little craft room boards are just so stinking cute I want to make at least one to put in my studio. I highly recommend this magazine for any beginner to beginning intermediate sewing. An advanced sewer might find some interesting tidbits and inspirations too. I know I sure did, but I wouldn’t only consider myself intermediate and a beginner intermediate when it comes to clothing… which is strange now that I think of it considering I’ve made a 1890’s corset with full spiral steel boning, steel busk, and grommets…. funny the things I will boldly undertake when I don’t realize how much I don’t know, haha.