Having just moved into a new place last month and unpacking everything there is a ton of cleaning going on. Granted I’m not spending 6-8 hours a day cleaning and unpacking anymore, but I’m still spending a couple of hours each day to get things where they should be. One thing that I’ve learned is that cleaning supplies are expensive! And a good all purpose cleaner is just hard to find. I’ve been switching over to less toxic cleaners for awhile now, but that illusive all purpose cleaner that I can use in the ferret cages and in the litter box and on glass and the counters. You know, just a little extra kick over water. Well I found it. And it turns out because I’m a dyer, I have a ton of it… you know what I mean. Vinegar! This stuff is awesome!

I found this Website called Vinegar Tips and it has over 1001 vinegar mixes and ideas for everything outside to inside your home! Then I became curious, I wonder what other home cleaning products that could be made from scratch with quite a bit of ease on the cheap. Turns out there are a whole lot. You should just go to say instructables and look up whatever you are interested in making. Where have I been! And thinking back I know that I’ve read tons of stuff on making your own cleaning supplies, it just slipped into the back of my mind. 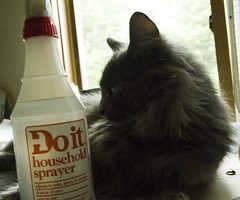 So more than anything still though, vinegar is my favorite. It’s so easy to use and pretty effective too. I just put a 1/2 cup vinegar in a spray bottle and fill it the rest of the way with water. Spritz all over town and wipe down. I was happy too that my ferrets didn’t mind the smell of it at all, and Molly gave it the OK for cleaning her litter box with.

In other newsy type stuff, I’m happy to report that my studios have finally merged into one and I now no longer have a “craft” studio and an “art” studio. I just have “the craft cave” or at least that is what Jason calls it, haha, I like it. It makes me feel like a super hero! 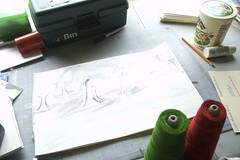 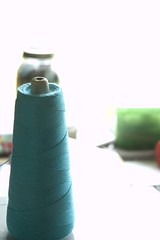 You see what’s going on there? Drawings and yarn? Pastels and yarn? All on the same table! Hooray!

Oh and speaking of things in the studio, I whipped up a bunch of new kits yesterday and I’m taking pictures today and they will be in the shop tomorrow! I’m also going to post a couple of new vintage cards to Kro Postal tomorrow too. Thank you to all you who have ordered things from any of my shops. It makes my day, seriously! Comments too! Comments and orders! Haha! 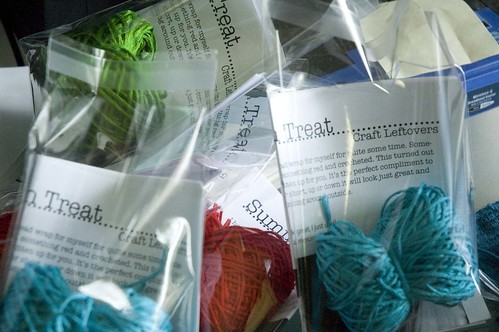 Oh oh oh and on top of a shop update, Craft Leftovers Monthly will be going on sale this Sunday too! It’s the one year Anniversary Issue!!!!!!!! Can you believe it, I have been doing this for a year! I’m so excited about this issue! I’m sure if you looked back through blog posts though I have said that about most issues. But it’s totally true! I really feel like every issue is better than the last, with last month topping the charts! I think I’m going to do another block print for the cover, but maybe a silk screen. I haven’t decided which way to take it yet, that’s what is on today’s agenda. Nail down the details.

Oh yeah! And an update on the pattern front. I did finish the pattern last night, but it’s already wednesday, so I’m just going to post it Friday. Then I’ll be on the schedule I want to be on finally. Sorry about the lack of patterns going on for the last two weeks, but it will be picking up now that I’m back from vacation and all settled.

On the personal news front, although my headache has gotten better, it’s still there tooling around behind my eyes making it hard to see, so I’ve been a bit slower. Also the car is still passed out in the drive way. I think I’m finally going to take the step into being car free! I just needed this kick in the butt :)

ps – you know, all that makes me think…. I think the 2 year anniversary of Craft Leftovers is coming up or is this week.. I’m not really sure. I’ll look it up and get back to you on that. Maybe I’ll bake some cupcakes to share! Haha!