Thrift Kitchen: From Martha to my kitchen 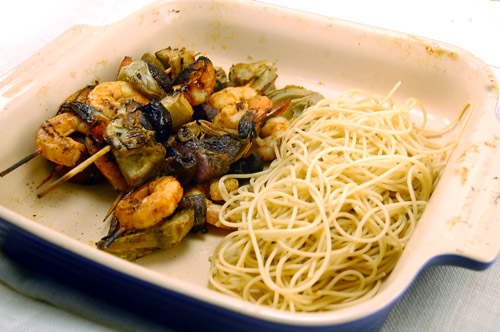 Last week I got my act together and made a meal plan. I checked out the April issue of Everyday Foods and found this tasty little recipe for Mediterranean Chicken. Only problem is that when I bought the chicken for the recipe, I was headed to work. So I stashed it in the freezer at the office and forgot to take it home. Well, crap. Jason was at the gym and in possession of the car.

I dug around in the freezer at home and found a bag of frozen shrimp I forgot about. Hmm, shrimp, artichoke, olives, red onions, and spaghetti. Would that go together? Let’s grill it! I put it all on skewers and added a little soy sauce, paprika, pepper, and cooked it on the grill. Jason and I ate it with the spaghetti and a little feta cheese. It was so delicious!

A little note on the artichokes: I used frozen artichoke hearts instead of marinated ones and they turned out really well. It was a lot less fat too because they weren’t soaked in oil. I definitely will use them again!

Happy Cooking! Hooray for not making extra trips in the car because of forgetfulness!
:: Kristin ::

3 thoughts on “Thrift Kitchen: From Martha to my kitchen”