Bento Quest: What’s in your lunch?

Over the past three months I’ve been searching for the perfect lunch box. I really wanted a bento box, but they, as I discovered, not available locally. In fact, I went to every gift shop, cooking store, asian themed store, and asian grocery (about 8 total) from here to Des Moines and back again. No luck. I just really wanted to hold it in my hands and consider it before spending money on one. Because I don’t really know if I’ll use it.

Flash back to May when I was in San Fransisco.

Jason and I went to Japan town and I bought a few food picks and sauce holders in the shape of little pigs and fish. I considered getting a bento box there, but since I worked from home I was like “nah, I don’t need one”. I had no idea I’d be getting a job by the end of the year and working in an office where I’d use one just about every day of the week!

Turning back to the stash.

Anyway, so, I decided to look around at what I had and lo’ and behold, I had a glass food container

that’s just about the perfect size to pack my lunches. And I had a soup thermos that was still in good repair from way back when. 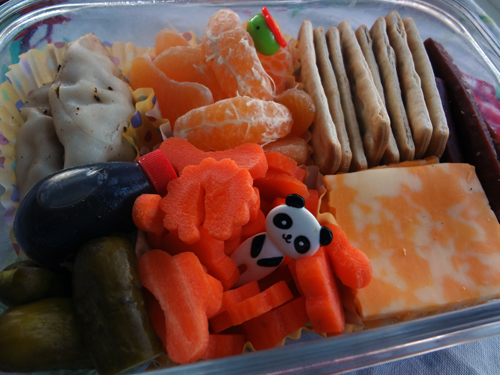 I’m finding that by packing my lunch bento style, I’m more inclined to grab a bunch of little things vs just one huge thing. So this first box was pickles, carrots, cheese and crackers, mandrine oranges, and pot stickers + some soy sauce in the little pig. It turned out to be way too much food.

), I was able to pack a whole burrito bowl in its parts + a mandrine orange. While the picture isn’t that great, the meal was delicious! I was able to pull out the cheese, sour cream, salsa, and mandrine, warm up the rest, and then add in the cold stuff (minus the orange which I had as a snack later). 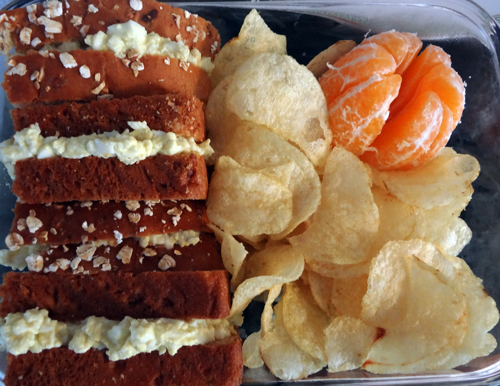 This meal was a comfort food lunch for me. Oh potato chips I love you, but you are so not good for me. Egg salad sandwich on wholewheat bread with eggs from the ladies out back. And of course another orange. I love those little guys.

And one thing I have found is that if I pack my lunch the night before, I take it. If I don’t, I’ll not have time and end up eating out. For shame on me! The bento box has made lunch more fun, usually more healthy, and a whole lot more cost effective. And, it’s not even an “official” bento box. But, it’s packed on the same principle, so I’m going with it.

So how do you all pack your lunch? What’s your favorite pack and eat healthy snacks?

Until Next Time!
Kristin

4 thoughts on “Bento Quest: What’s in your lunch?”