… And her lovely spinner’s flock! It was an odd chain of events that lead to this interview which warrants a little back story: My friend Kelly and I were at the Yarn Exchange talking about random this and thats when she told me she had seen all these lovely sheep over on Airport road and we should go check them out. A few weeks later, same scenario, but there were now all these little lambs now! We started scheming how we could go and take their photos and were trying to figure out who we should contact and etc etc when this woman walks in. She had some fliers and wanted to know if we could put some up. She was just starting out selling roving from her little flock and wanted to get the word out. 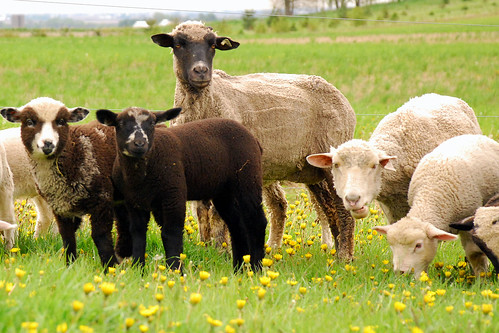 Well, after talking for a little bit, it turns out those were her sheep on airport road! Well, at least some of them were and she was going to be moving them to a new place where they couldn’t get out of the fences. I said “Hey Kelly, you will never believe this!” And Kelly came over and Charlotte was so nice to put up with our enthusiastic ramblings. And she was also nice enough to agree to meet up at their new home once they were moved so Kelly could take photos and I could interview her! Glorious luck!

We had such a great time meeting the sheep and talking with Charlotte. I wish I would have had a digital recorder than, but I didn’t. Now I do though, so maybe next time.

Charlotte started out sewing and slowly was drawn into spinning after taking a class at the Fine Line and Kishwaukee College. Now working with fibers has really become her passion. Her husband John had grown up on a farm and was interested in raising animals again and encouraged her to find out more about raising sheep for their fleece. She talked to Tony Neal and it worked out that she actually gave her their first sheep! It’s wonderful how these things work out. I had never heard of a spinners flock before and I really like the idea of it now that I have. Basically, instead of going for the “perfect” sheep, you have a selection of sheep with different fibers types and colors that would be good for spinning.

She has 2 rams – a pure bred merino and a pure texel, which is normally a meat breed, but they have lustrious 3 – 5 inch fibers. She also has Ewes which are merino/cvn mixes. CVN stands for California Varigated Mutant. It’s so interesting to see their fiber because it is all different colors, not just on the exterior of the fleece, but the fibers closer to the body are also different! She also has Finn Sheep, they have long staple fibers and tend to have multiples, which turned out to be the case because she has a set of twins! The oldest sheep were two months old at the time, so about 4 months now.

The sheep are sheered once a year and then the wool has to be processed. She skirts them to remove all the undesirable wool and then washes it by hand before sending it to the mill. They then wash it again and make it into roving. It usually takes about a month to 6 weeks to get off the sheep and then onto her wheel. She has started expirimenting with dyeing the batts with professional grade acid dyes as well as spinning beads and locks into the yarn.

She has a French angora rabbit and will be getting 2 german angora rabbits soon. Her kids love the sheep and one son in particular is really excited about getting a sheep dog. As he put it, “We are going to get the dog and play ‘risbee’!!” She has three small children, 2 boys and a girl.

At the end of the interview she showed us roving samples from the sheep as well as her rabbit. So lovely! I drooled and Kelly drooled and then she gave me a huge bag of merino roving for dyeing because she knew I was a dyer and a spinner and then she gave Kelly a lovely skein of hand spun yarn because she is a knitter! She is so nice! I can’t wait to get my hands on some more of her roving. I am particularly interested in the merino/cvm roving. It was so pretty and soft.

She sells the roving from her sheep as well as other local shepherds. You can call or email her for information, availability, and samples. Her email address is theshepherdsgirl@gmail.com (at) gmail (dot) com or you can call her at 815.748.3782.

Go email or call her, she is so nice and would love to hear from you.

Now I wanted to pair up a give away with this interview and because of delays in posting, it corresponds to some great other news! I just this week purchased a mail box to be my business address! Jason and I had been talking about it for awhile, and I can’t deny that I have fantasies about receiving mail from all of you, but for more practical matters of supply shipment receiving and not having a permanent address right now and keeping our home address private, we decided it would be a good idea to get a pmb address (parcel mail box address).

I wanted to test it out and stimulate the mail flow a little bit by hosting some give aways. Like I said, I have fantasies of mail from unknown people :)

This is what the give away is for: 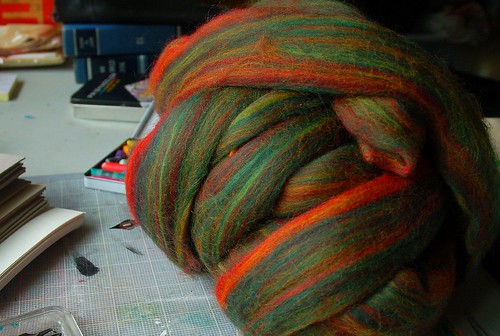 Plus some other goodies that are yet to be decided (maybe some yarn and stitch markers if you are lucky, hehe).

All you have to do to enter is mail me a post card (cheaper postage for you) or a letter (if you feel so inclined, I love hearing from you all) with a short story of how you learned to spin/knit/crochet/weave/etc and who taught you. I love stories so be as long winded or as short as you like. Oh and if you are not a spinner, don’t despair! I’ll wrestle up some great hand dyed yarn for you instead of roving.

It has to be post marked by August 1st (one week from today). I’ll announce the winner two weeks after that, so August 15th (give it plenty of time for people’s mail to get to me).

And that’s all for today. I’ll see you all on Monday!

ps – all the clm subscriptions are out and on their way to you lovely folks, I’m going to eat lunch and send an email to all the subscribers, if you ordered and don’t get a confirmation by tomorrow, email me at craftleftovers (at) gmail (dot) com and let me know. I don’t want to miss anyone!

Quilter’s Cashe :: A Jackpot of a quilting resource