Jason and I are having a load of fun lately with starting up our own indoor garden and playing around with home brewing. Me, well, I just needed some green in my life. And, like I talk about at the end of today’s post, learning new things and spending time dreaming about gardening really helps to beat the cabin fever.

Houseplants
The first thing was that I started compulsively buying up houseplants. We now have a full planter – christmas tree shrub thing, rosemary, an asparagus fern, a cactus, some palm plant, another tropical something I don’t know the name of, a violet, a half dead plant that it turns out is cat poisonous and I’ll be tossing officially today. 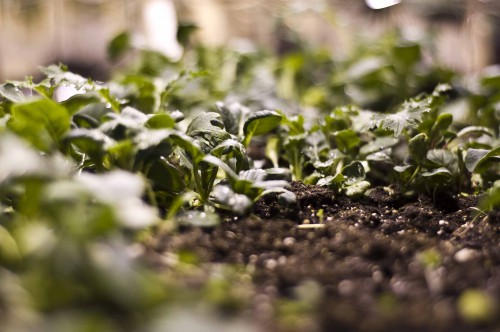 Then I got the idea that “hey, who cares if the garden won’t be ready until mid to late april and I shouldn’t be starting seeds until March, I’m going to take some of these old seeds and plant the just for fun. Maybe I’ll even get a flat of salad to munch on.

Hydroponics
Then Jason started playing with the idea of hydroponics. He made his own set up before and the more he thought about it, the more he liked the idea. He decided he wanted to grow some tomatoes and cilantro and got to work building his own diy hydroponics set up. 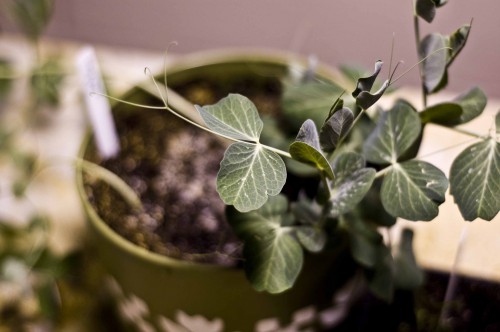 Then I started getting excited about the idea of actually growing full plants in the basement green house style and well, one thing lead to another and here we are with room in the basement fully devoted to winter growing!

Cats OUT!
Keeping the cats out of it was the biggest issue, how could we blame them for wanting to dig and play and lay in the dirt and plants? They are cats after all. Several times I walked downstairs and Molly was fully lounged on the salad mix seedlings, haha. It’s so hard to be mad at her, but it really had to be stopped or she was going to kill all of them.

A doored room was the only thing we could think of so this weekend we went to Lowes and bought the supplies to install a door to one of our basement rooms. It works great, the room gets so warm and smells so earthy. And the salad seedlings have recovered enough that we were able to mix some fresh baby greens into salads yesterday at lunch, yum! 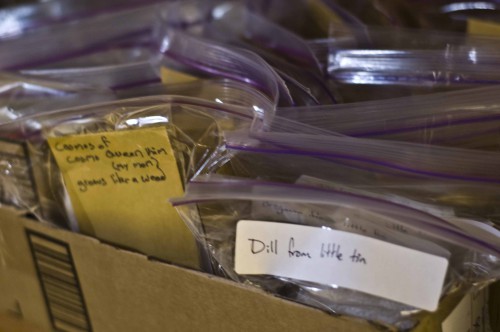 Quite a few seeds still haven’t sprouted even though we planted them about 3 weeks ago — seeds with like a 14 day germination time — so I decided it was time to figure out what was viable and what’s not. It’s just about time to order seeds for the garden and it will be helpful to know what I need. Turns out some of my seeds were from 2003! Yikes. I tossed some of the cheap-o generic ones, but quite a few I saved from my old garden at my grandparents, from my mom’s garden, and from my great grandma’s. So I’m sprouting them all to see if any of those are any good. I wrote up the whole process and how you can take the ones that do start and transplant them to little diy seedling pots. Pretty neat right?

I go down there first thing every morning to check the seedlings, water everything, and take notes on how things are progressing, it’s a very nice way to start the day.

After reading the The Urban Homestead

, I just had to give home brew a try. After much searching around I decided that hard apple cider was the most appealing to try. It sounded pretty easy, the start up was on the lower end of brewing stuff (no carboy needed), and we don’t drink a ton, so a lower alcoholic content was nice too. 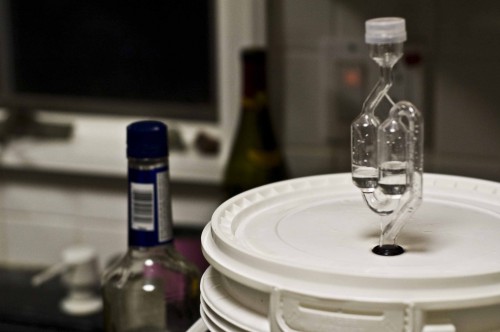 Saturday night we whipped up a batch and set it down in the basement to ferment. I’ll let you know how it goes in 3 weeks :) In the meantime, you can read all the details of our process over on Kristinmroach.com – just part 1 of our first try, not meant to be a tutorial to be tried because I don’t know if it will work or not, haha.

Once the start up is paid for (bottle capper, bucket, air lock, siphon, etc) each batch is pretty cheap to make – just like $4 for a gallon of hard apple cider. Yum!

Winter in the north is a time of the blues and it seems like late January to early February is the worst time. We are a month or so into perpetual snow and gray cloudy skies really can start you get me down. Spring seems forever way.

I’ve started to find that the best thing that I can do during this time of year is really get into gardening. Dig through the catalogs, fawn over all my seeds, and this year I decided to even start some seeds.

Another thing I’m fully embracing is learning a new skill. Maybe as simple as puzzling out a new knitting technique or as complex and new as brewing my own hard apple cider. It adds interest and excitement to an otherwise cabin fever state of being.

And last but not least, going for walks! I know, really, it’s so cold! But seriously, going for a walk gives me some sun exposure, the cold crisp air is invigorating, and it’s really pretty out with all the snow. A 10-15 minute walk a day is a great amount.

How do you beat the winter blues with homemade fun? What’s your favorite activity?