How to: Make a Replacement Pet Bed Filler 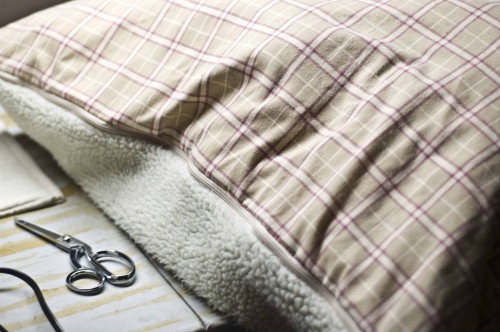 When we got Jak last month, I thought I was being oh so smart by getting a dog bed with a removable cover. The theory was that I could just take off the cover, give it a wash, and be good to go again. Well, that’s true except in the case of accidents where the whole thing gets soaked through. Next time I’ll make sure to get a cover that’s water proof as well as removable. Ah well. Hopefully we have dealt with the last of the pee issues.

We’ve found that Jak has some separation anxiety issues starting about a week and a half ago and consistently messes in his crate every time we leave or go to sleep for the night. Usually within 15 minutes of us leaving too. Gross.

I had to toss the whole inside filler because there was no way to clean it, it was soaked through. I did actually try, but it just shredded the “fabric” that the stuffing was contained in. Bah.

Time to pull out the sewing machine and make my own.

It was surprisingly easy, so I thought I would share this with you, just in case you have a pet with a bed that needs a new inside.

First: Measure your dog bed cover. Mine is 36″ x 60″. (Jak is a huge dog.) Add 8″ to the length and width to allow for the stuffing. I honestly skipped the width part because I didn’t want to sew on a panel of fabric. My fabric was exactly 36″ wide.

Second: Cut two pieces of fabric that size. The seam allowances will make it slightly smaller so it fits well. Prewash and dry them so they don’t shrink if you have to ever wash the inside. (I used muslin because I have a bolt of it and it’s cheap.)

Third: Round up a pile of polyfil. I have a whole box that I had purchased wholesale years ago. I was on a knit plush kick and was going through bags of the stuff. Of course as soon as I got the 5 lb box, (just think about how much polyfil it takes to measure 5 lbs!) I stopped. Ha. Anyway, it took about 2 pounds to fill Jak’s bed. But it’s pretty huge. 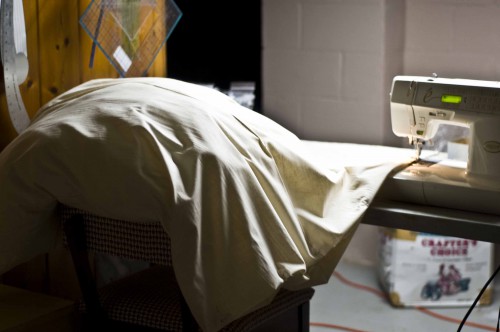 Forth: Sew it. It’s a big rectangle, so just stitch around the entire thing, leaving one side open. I used 1/2″ seam allowances and did a straight stitch and then a zig zag stitch over that. Extra sturdy was the idea. Turn the whole thing right sides out and stuff with chunks of polyfil. You only need to fill it loosely, don’t pack it.

Last: Tuck the open edges under and sew shut. Make sure to lock the stitches at the beginning and end so it doesn’t unravel. Shove into the freshly washed cover, zip it shut, and give back to your pup. 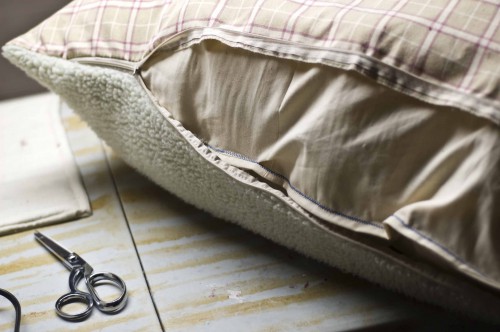 Oh and happily, after figuring out that it’s not a house training issue, we’ve been able to work on it. We’ve figured it’s a combo of three things – schedule change, irritable bowel syndrome (I kid you not), and separation anxiety. Poor guy. But hey we are on day 2 of no messes, whew! Yeah Jak! That’s a good dog!

9 thoughts on “How to: Make a Replacement Pet Bed Filler”