Midweek Get Over Hump Day with Cooking

This week I’m going to do something a little bit different, instead of a craft, it’s cooking (mainly because I don’t have access to my stash at this point, i’m still out of town! Cooking crafts will be the theme for the next two weeks. I think it will be kind of fun. This week there will be some winter stew recipes and I’ll show my attempts at making a Brazilian Black Bean Stew.

I would say this is just about the best soup cook book I have ever come across. I haven’t found a recipe I don’t like yet! That is pretty amazing if you ask me. 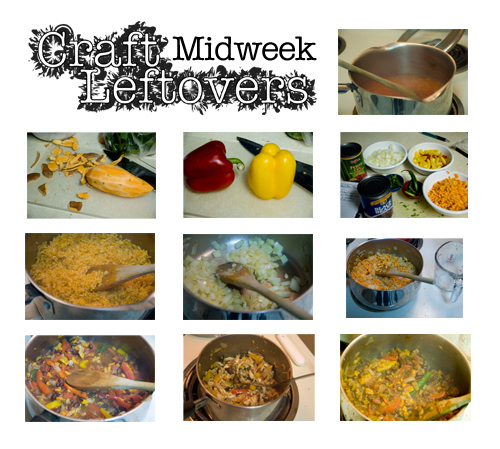 I loved the rice, you just cook brown rice with one can of tomato juice to replace some of the water component, it tasted so good with this dish.

I added about 2 teaspoons of flour to help thicken up the mixture, I like a really thick stew personally.

And I made chicken for jason by boiling a chicken breast with salt, pepper, and chili pepper and then shredding it with a fork when it’s cooked. Then I added the reserved diced tomato juice and let that simmer for a little so the chicken would soak up the flavor. I mixed that with some of the stew and let it simmer for about 5 mins.

I placed the rice and stew on a plate next to each other with cilantro as a garnish for myself and less stew and then the chicken for jason on the side. We both gave it 5 stars, I’m definitely going to make this dish again.

I somehow, I think because I was so hungry, completely forgot to take a finished shot of the dish all put together. From start to finish it took about an hour to make. I halved the recipe and got 4 nice sized servings from it.

I think all this good winter food cooking came out of my resolution (really after Thanks Giving). I’ve been trying to cook one new dish a week and then try out variations on that dish. I set a bunch of goals and announced them to the world yesterday on my blog. It felt good to do. Mainly I’m trying to be healthier and less wasteful and independent from a traditional job.

So after doing the midweek post a few times, I’ve really grown to like it and want to keep it up. I thought about changing the theme each time, or doing a theme every two weeks, or one per month. Well, then I thought, i’m thinking to much about this and I’m just going to play it by ear. Sometimes there will be a couple midweek posts about similar things (bookmarks, books, and note pads, other times it will just be a one time thing (like the reusable market bags). Basically whatever strikes me, haha.

Going back to resolutions and goals and whatnot, what would you like to see happen with Craft Leftovers this next year? Leave a comment or email me at craftleftovers@gmail.com. I LOVE getting feedback from you, I’m serious when i say it makes my day.

Well I’m out of here, have a super crafty week!
++ Kristin Roach ++

2 thoughts on “Midweek Get Over Hump Day with Cooking”