Falling Out of the Kitchen & Falling Back In

Well, I have to admit, I fell out of my Thrift Kitchen. Not only was I eating junk food and fast food on a regular basis, but I also have not been cooking as much as usual. When I did eat at home, it was crap. Chicken or the egg. Am I eating crap because I’m eating out? Or eating out because I’m not cooking? Who knows. Either way, I really sucked at cooking and was eating crap.

Then I stopped working out. Two months and 5 pounds later, I’m working out again, packing my lunches, and cooking 3-4 times a week. And, making sure that I have at least a couple meat free days meals.

I did this crazy dieting experiment this summer after I got back from San Francisco (*cough* Atkins) and I lost 7, then gained 15 lbs. I know I know, “Atkins? What? Why would you do that?” I was curious how my body would handle it. Well, it handled it BADLY. I’m not going into the details.  It just left me with a taste for butter, cheese, and sausage for breakfast. When I stopped the low carb thing, I still craved all that stuff. 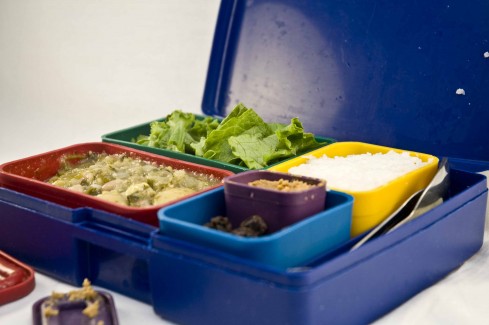 Anyway, eating too much meat and fatty foods has been an issue for me lately. That is so strange since 2 years ago, I was a really strict vegetarian bordering on vegan. Though I most likely will never again be a vegetarian, I am going back to a lot of the eating habits I learned during that time in my life. I am finding it so much easier to make healthy eating choices.

The biggest habit changer is taking a lunch with me to the office. And, using my bento box! It really forces me to take a look at what’s in the fridge and come up with 4 different things to take instead of just tossing in a thing of ramen or an enchilada. Even though the enchiladas are healthy, there is no snack or fresh veggies/fruits. 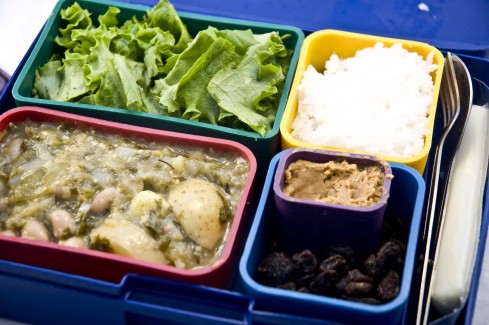 –best vegan cookbook I have. I love it, every recipe I’ve tried is a tasty dish).}

The bento box also helps with portion control too (another huge issue I have). See that jasmine rice? It’s way less than I would normally have, but enough where I was full. The only problem is that as much as I love my bento box, the clasp broke and never really worked in the first place. I’m in the market for a new one, but for now, I’m okay rubber-banding it together. :)

On Saturday I actually made a meal plan. Those following on twitter might have seen me pose the question, “What do you eat for healthy snacks?” Honestly, it’s a problem for me and I’m not a picky eater. I was just sitting there making my meal plan, thinking we needed to get something for snacks and the only thing that was coming to mind was cheese sticks and cottage cheese (throw back to Atkins for sure). I had so many helpful replies!

While looking around, I also found this neat visual guide on 15 healthy snacks.

I’m back on track again and I am so excited about it. I even made this fitness/meal plan/food journal that I bound into a little 4 week book. 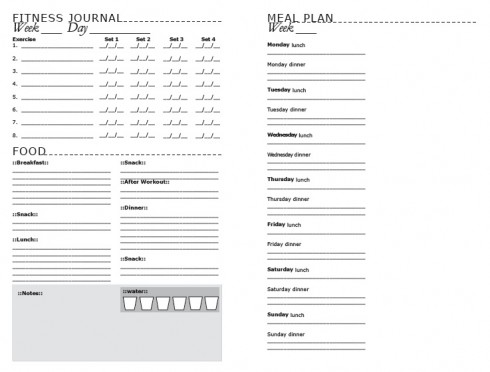 You can download a copy of the pdf for yourself . Print it double sided and it will give you a week of fitness/food journal pages and 1 meal plan page. I write my grocery list for the week next to meal plan and then staple my receipts for the week to that page.

Nothing keeps you on track with a diet and exercise plan like keeping track of your progress. I mark down my food for each day, my water in take, what exercises I do, and then once a week I weigh in. Progress is slow, but it’s steady.

I’m excited to be back on track and in the Thrift Kitchen. I’ve been trying a lot of new recipes. I think I’m going to take every other week to post what I’ve tried and how it turned out with pictures. It’s been fun to learn some new skills and new dishes. Just in the past week I tried chili verde from Veganomicon

I have a new pattern in the works for tomorrow. It was inspired by a reader on Ravelry who wanted a worsted weight, crochet, fingerless mitten pattern. It’s taken me a few weeks, but I finally got the pattern how I want it.

7 thoughts on “Falling Out of the Kitchen & Falling Back In”